Seán Moran: All Stars trips were great while they lasted 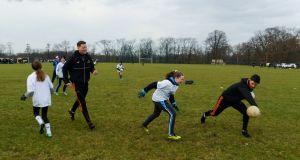 All Star footballers Conor McManus of Monaghan and Ryan McHugh of Donegal with members of the Philadelphia GAA Club during a coaching session in Limerick Field, Philadelphia. Photograph: Ray McManus/Sportsfile

The GAA has always had a fascination with the USA. Last weekend the endangered species that is players on an All Star tour visited the Limerick Field facility in Philadelphia to coach local children in what was just the latest venture from the Old Country to engage with far-flung brethren.

It was actually an instructive day in that it emphasised the growing strength of the overseas units’ own development programmes and how the GAA in America is steadily moving away from reliance on emigrants from home and instead producing their own players, many of whom have little or no connection with Ireland.

Emigration from Ireland to the US is harder than ever and if Gaelic games are to thrive in the country, they must be developed among the existing population even if those arriving from Ireland will obviously still have a significant influence.

Whether that will be a metaphor for All Stars tours in the future remains to be seen but sound and all as the reasoning was for the discontinuation of the exhibition matches, something was lost in the process.

The matches as contests had become pantomime but they were a focal point of the trip and the GAA community always gathered around them, émigrés to meet players from their own counties and locals just to see the stars of matches many would have probably watched during the championship.

The trip was also an opportunity for officialdom to make speeches, do state-of-the-nation press conferences and address the place of overseas development in the association – six years ago, for instance, then president Liam O’Neill suggested in New York that the day would come when there would be more GAA members abroad than in Ireland.

This time around, with no match, all of the players went along to the Philadelphia GAA complex, Limerick Field, last Saturday and conducted coaching sessions with more than 100 children. Players tend to be very good at this and make excellent ambassadors, a memorable example being the 2013 visit to Shanghai’s University of Sport by a group of All Star hurlers.

Clare’s Brendan Bugler and Pat Donnellan, Richie McCarthy (Limerick), David Collins (Galway) and Patrick Maher (Tipperary) all had to battle a fairly impenetrable language barrier and did so with aplomb, giving a demonstration of hurling skills as well as conducting an impromptu coaching session for the students.

This year there was apparently an offer from New York to play an actual challenge match against the All Stars but you would imagine that the startled reaction to that from sundry intercounty managers would have left the travelling media being needed to do more than conduct interviews. It has led to a smaller travelling group, as there is no need to crew-up the numbers for an exhibition match.

It is perhaps strange to note that the first trip in 1972, involving the 1971 champions and award winners, featured a serious row between players and administrators

Players these days have no shortage of opportunities to travel and nearly all top counties take holidays abroad. However, work pressures and family responsibilities make it hard for many simply to take off a week.

That said, the US remains the default and – based on anecdote, the favoured – destination for the All Stars. Ten of the 18 host venues since the resumption of the trips in 2001 have been in America with the rest scattered between the Middle East, Far East and Argentina. Over nearly 50 years– not unbroken, as there were no tours for 10 years between 1991 and 2001 – the All Stars have mostly made their way to North America, exclusively so in the pre-1991 years.

The original trips were extensive, bringing both All-Ireland champions and the All Stars selections together each year to the US. Given the popularity of such an opportunity, it is perhaps strange to note that the first trip in 1972, involving the 1971 champions and award winners, featured a serious row between players and administrators.

The tour by the All Stars and the respective champions, Offaly and Tipperary, to the west coast of America was organised – at a cost of $30,000 (index-linked, $184,000) – by the United Irish Society of San Francisco who were providing players with a daily allowance of $6 (roughly $36.72 at today’s values) for the 10-day trip. The allowance became a bone of contention for the Offaly footballers, who issued a demand that £1,000 be split among the panel of players, which was referred to the GAA executive (forerunner of the current management committee). Significantly, neither the Tipperary hurlers nor the All Stars teams looked for any extra money and the GAA flatly refused to dish any out.The Offaly players ended up responding to an ultimatum and signing an undertaking that they would “accept the conditions laid down for the tour”.

On a related issue, the original tours didn’t provide for hotels and players were placed with families in San Francisco – with mixed results. Some ended up as far as 70 miles from the city and Tipp hurler Peter O’Sullivan was said to have been put up in a reformatory.

Three years later Dublin footballers refused to stay with families and insisted on making their own accommodation arrangements. Due to the change in sponsorship from PJ Carroll’s to Bank of Ireland in 1979, hotels were provided for everyone.

The All Stars trips could revert to playing matches although this seems unlikely and it’s more probable that they will downsize into a promotional exercise for a handful of players or simply disappear into GAA history. Either way they will leave warm memories.