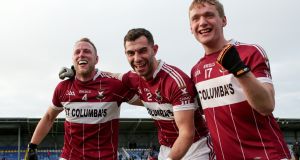 There have been plenty of touching ads for the AIB club championship over the years, but you could not write this one. A half-parish of 400 people, a church, a community centre, the national school with only 44 students left and a football field beside it.

Mullinalaghta sits on the north-east Longford-Cavan border, the same parish as Gowna – a place not readily found without solid directions and some lonely stretches from either Granard or Cavan town. The post office closed down two months ago. The broadband is poor.

Since St Columba’s GAA club was founded, in 1889, they’ve won five Longford football titles – in 1948, 1950 and the last three in succession. This year they’ve also gone on to make Sunday’s Leinster final – the first Longford club in the 49-year history of the competition to progress that far.

And, in the classic David-versus-Goliath contest that often marks this competition, they face Dublin champions Kilmacud Crokes, twice All-Ireland champions in the past, seeking a fifth Leinster title, boasting a club membership about 10 times greater that their opponents’ population alone.

Still, that’s only half the story. Without Gaelic football, there might not be anyone left in Mullinalaghta, at least not in their 20s or 30s, and forward James McGivney knows that because he is one of them.

“Only for the football field, I’d say the majority of our team would be emigrated by now,” says McGivney, at 25 a sort of microcosm of the club. “That’s the heartbeat of the club, the only thing keeping the community together. It’s not just us, it’s happening all over rural Ireland right now, and if it wasn’t for the club there wouldn’t be too much else happening.”

Indeed, McGivney did leave, taking off for Australia in 2014, working six months on a building site in Sydney, then three months on a dairy farm in Victoria, for a Cork couple, Tony and Sharon McCarthy. Still, he knew in his heart he’d have to come back to Mullinalaghta to help keep the rural club alive.

“I’d planned on going for the year, but cut it short to come back with the club. That year we were beaten in the Longford quarter-final, by a last-minute goal, which was heartbreaking, but we always knew we had the talent. It was a matter of putting it all together and producing it.

“So it was in the back of my mind before I left, it’s very hard to leave lads you grew up with, say ‘look, I won’t be around this year,’ so I took the decision to come back, because I know the amount of work lads put in. I’d be 100 per cent sure there would be a lot of lads going, especially young lads and students. We have two or three lads there who got offers to go to America this summer – and they turned it down because of the club. But fair play to them, that just goes to show the trust the players have in everyone around them.”

Nowhere is that spirit more evident than in the aftermath of their most recent Longford titles, the team visiting Mullinalaghta graveyard to pay their respects to the players of 1948 and 1950, all since deceased.

“Every year we’ve won it, we’ve went straight back to Gowna to the Piker’s Lodge for grub. Then up to Fitzpatrick’s Tavern. Head back on a bus, drive by Mullinalaghta graveyard. We got out of the bus, said a few prayers, and brought candles over to relatives. Laid them on the grave. The priest said a few words. It was nice.

“I suppose we just wanted to stop off in memory of those lads who did win it back in 1950, show our respects to them, that they were still being thought of as highly as they were now. We got the bus back then to this cross – there is a cross in the middle of the parish – and there was a big bonfire there, everyone was there.”

McGivney also acknowledges the influence of manager Mickey Graham – “a shrewd operator” – who for 2019 is taking charge of his native Cavan. He knows too Kilmacud are raging favourites, but that Mullinalaghta won’t be going down without a fight.

“There’s always a chance. All I’m hoping for is that we produce the best possible performance. We cannot to let ourselves, our supporters or our club down. We know if we perform to the best of our abilities, you’d never know, something special might happen.”

As if it hasn’t been special already.