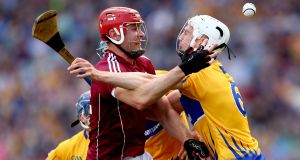 Galway’s Jonathan Glynn and Conor Cleary of Clare during the drawn 2018 All-Ireland hurling semi-final at Croke Park which was shown again recently on The Sunday Game. Photograph: James Crombie/Inpho

It’s like an inexpensive piece of real estate under which oil has been discovered. When Eir sport acquired the GAA’s archive rights in the last round of negotiations three years ago, until 2022, it looked a good fit for a specialist sports broadcaster with plenty of need for content and the channel’s Classic GAA series has featured plenty of that archive.

It couldn’t have been known when the rights deal was being drawn up but those old matches have become the only games in town since the scrapping of all sports because of the Covid-19 pandemic.

It hardly caused any comment when the official statement in December 2016 mentioned down the text that Eir sports would have “access to the GAA archive”.

The problem that has arisen for national broadcaster RTÉ is that it has no access to archive, which dates back beyond 2017, as revealed by the Irish Independent earlier this week – the year of its current live agreement.

The broadcaster has brought back The Sunday Game despite the complete absence of championship fixtures and intends to run archive matches as well as features and topical discussion. The series began last weekend and featured the Galway-Clare All-Ireland hurling semi-finals from 2018 and Dublin’s football win over Mayo in 2017’s final.

Three years of material will make the remainder of the summer a tight stretch for RTÉ if the Eir access remain restricted.

During the current media rights deal, RTÉ and Eir have had a constructive relationship up until now. The State broadcaster has effectively acquired rights from Eir subletting them and that has allowed terrestrial audiences to watch live league matches and later in the year, county championship fixtures.

Although Declan McBennett, RTÉ’s head of sport, is seen as sympathetic to Gaelic games, he pointed out in an interview in this newspaper at the beginning of last year that with the loss of Six Nations rugby rights before he arrived, there was both space in the schedules and resources available for further sports programming.

He also inherited the current agreement with the GAA.

It is considerably frustrating for RTÉ not to have retained some residual rights to archive given that they have been broadcasting All-Ireland finals since being established in 1962 and as a result they have nearly 60 years of matches in the basement.

There are also the exceptional circumstances of the present pandemic, which have led other organisations to make their archive freely available to their rights holders. For instance Fifa, Uefa and the IOC have been allowing the broadcast of past material from World Cups, European Championships and Olympic Games as a result of no current activity being available.

Lockdown has been an added burden for RTÉ, which had rights to both the European soccer championship finals and the Olympics.

TG4 has been able to show the soccer archives as a result of sharing the Fifa Women’s World Cup with RTÉ last year. Significantly it also held on to its GAA archive rights, which are restricted but make up a crucial part of its programming.

Its first iteration as an Irish language channel, TnaG, pioneered the use of archive by broadcasting All-Ireland Gold from its early years in the mid-1990s – programmes which arguably put the station on the map of public consciousness.

The GAA regards itself as an “honest broker” when dealing with any disputes between rights holders and had to agree the subletting of Eir sport’s rights to RTÉ in respect of league and club fixtures.

It is believed Croke Park would be willing to facilitate any discussions which might resolve the current impasse but has not as yet been asked to intervene. In the meantime it is contractually bound to stand by the contract signed with Eir, which is thought to be worth in the region of €200,000.

Yet this is also a dilemma for the GAA. RTÉ is its primary broadcaster and although its rights portfolio has shrunk over the years, it continues to draw the biggest audiences for football and hurling matches, averaging nearly a million for both the draw and replay of last year’s All-Ireland football final, which placed them second and third, respectively, in RTÉ’s most watched programmes of the year – behind only the perennial ratings topper, the Late Late Toy Show.

RTÉ will be facilitating Gaelic games throughout a barren summer despite having virtually no archive – to the extent that it would be easier to have a Sunday World Cup in the same slot.

Already rights holders RTÉ and Sky are considered nearly certain to be sitting down at some point with the GAA to discuss financial issues after a year in which the entire championship programme may well go by the board.

Should the current difficulties not be on the way to being addressed along the lines of previous arrangements between Eir and RTÉ, the GAA will need to be more proactive if it’s not going to undermine one of the few promotional tools it’s likely to have in 2020.