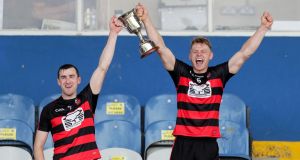 Be careful what season you wish for. After becoming the latest club to make exemplary use of the suddenly Covid-defined calendar, Ballygunner find themselves without any offer of further prize beyond a seventh successive Waterford hurling title.

The manner of Sunday’s victory – with 17 points to spare over old rivals but a younger Passage team – also suggested they were primed for a provincial and possibly national title, those previous six titles producing only a single successful campaign in Munster two years ago.

Still the advantages of a short, sustained championship, seen in neighbouring Wexford the previous week, were again on view in Walsh Park – the pitch also in prime playing condition compared to the frequently conventional club season.

“I’m sure some people are potentially opposed to it, from a player’s point of view, I’d be behind it 100 per cent,” said Philip Mahony, Ballygunner joint captain on Sunday along with Barry Coughlan.

“I’ve had the experience of playing for Waterford for the last number of years too. We’ve been lucky with Ballygunner, getting long runs, but I don’t see any reason why the GAA, or whoever is making the decisions, can’t see how well things have worked.

“Give the intercounty lads the opportunity to fully immerse themselves [with the club] up until whatever time of year that might be, and give club players probably more clarity in terms of when they’re going to be playing – and give management teams all over the country a better ability to prepare.

“You might have some teams like to train from Christmas and they’re potentially playing a game or two in April, then they’re waiting until September. That’s crazy and doesn’t happen in any other sport in the world. I think everyone would hope that that’s going be the case going forward, there’s no reason why it shouldn’t

Though still only 29, Mahony opted out of the Waterford senior county panel at the start of this year, citing the difficulties in juggling both the county and club season, especially given the increasingly overlap, and the travel commitment required from his Dublin base.

No turning back now however: “Since stepping back I’ve been involved with the club for a full year and it definitely does give that clarity for everyone. At least now you have a situation where the [county] lads can go back and fully concentrate on Waterford and not getting pulled for meetings or for training or half keeping an eye on the other side [club]. They can fully concentrate on whatever championship they’re involved in and I’d say everyone thinks the same, really.”

Ballygunner made their greater experience count on Sunday too, though Mahony also praised the off-season work of his club-mates, especially in the early days of the national lockdown.

“Look, experience definitely does help. I remember my first county final, I think it was 2009 here, against Lismore. I was unbelievably nervous and probably prepared a little bit differently than this morning.

But even the younger lads that have come into the set-up this year, they’ve been playing in finals at underage and in fairness, they really drove things on, particularly Tadhg [O’Sullivan] and Kevin [Mahony]. Paddy Leavy was the same last year, really drove things on. I remember the lads when they were younger than they are now, so to be on the field now, with them, that was just really special.

“A lot of them don’t need too much advice to prepare for the games, particularly this year. Over lockdown you see the physical conditioning of them, the shape they’re in because of what they do off the field. That kind of thing is unbelievable, they’re the ones really driving the standards.

“If we were preparing for a Munster championship then it would mean things in general, life, we would be back to normal. Of course we’d love that, same as Passage would or any team would.

“We were just faced with what everyone else is faced with and the circumstances. In fairness to the county board here, they’ve done a great job of getting the championship played off very, very quickly. There’s been a lot of clarity in the way it’s been run, it gives you real focus and lads aren’t being pulled in every different direction. But it is is what it is now and you just have to cherish these moments, because they might never come again.”