In 1970, the GAA experimented with longer games before settling on the current 70 minutes 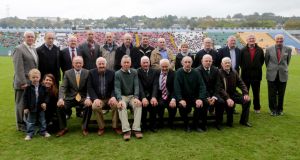 Fifty years ago this month, the GAA launched one of the more curious experiments of its long history. For the 1970 championship it was decided that all senior intercounty finals and All-Ireland semi-finals would be played over 80 minutes. This was actually an increase of a third, as the duration of matches then was only an hour.

The five-year experiment ended in 1975, after which all senior county fixtures were fixed for 70 minutes, which remains the case.

The anniversary of the first weekend of the experiment came a few days ago. The provincial finals were the Leinster hurling and Connacht football, won by Wexford, who deposed All-Ireland champions Kilkenny and Galway, winners over Roscommon.

“The significance of the 80 minutes wasn’t noticeable,” according to Wexford’s Martin Quigley, who was a teenager that year in his first senior championship. “It came in with no hullabaloo and players didn’t seem to notice – there was no big concern about burnout at that stage. In the context of the match it was just an extra 20 minutes. I was very young at the time and maybe older players felt it more.”

Another young player that season was Kerry’s John O’Keeffe, who last year recalled the experiment with some puzzlement.

“I have no idea why they pushed it out to 80 minutes. Fitness levels were not close to what they are these days. Back then you did two nights’ training and had a match at the weekend. Dwyer revolutionised that in response to Heffernan’s Dublin. He introduced Saturday training – to the horror of Jimmy Keaveney.”

Interestingly, Keaveney is on the record that first weekend, as Dublin played a full-length challenge on the Saturday evening against Offaly, who were preparing for the upcoming Leinster final against Meath.

Afterwards he was actually enthusiastic, but wondered why it was being brought in mid-championship.

“It’s great, especially when you steam up to it, but it is a pity that the idea was not used earlier in the season.”

Offaly’s Willie Bryan, who would lift the county’s first All-Ireland the following year, was also happy enough. “Naturally enough, you feel it a longer game out there but there is no real strain to last out.”

Reporting on the Leinster hurling final in these pages, Paddy Downey said that whereas it was too early to come to a conclusive judgment on the new duration, “it certainly gives spectators sound value for their money.”

Quigley actually disagrees, pointing out that his miserable experience in the final – a nine-point defeat by Cork –- meant that spectators had to spend longer watching a match that was already over.

“Unfortunately, I try to forget it because we were beaten so badly. I don’t remember as much about the Leinster final except that I was playing on Martin Coogan. I was only a chap at the time and had been a minor the year before. I remember him being a gentleman to play against and when we got to the All-Ireland, he wrote to me and wished me the best in the final.

“For a young lad that was a lovely gesture to receive before your first All-Ireland. He was coming near the end of his career and he had won a good few All-Irelands and it was something I never forgot.”

The 1971 commission on the GAA reveals that there were already misgivings about the innovation, but more in relation to hurling.

“We are aware of the opposition which has been voiced against allowing a playing time of 80 minutes for hurling. We feel that the innovation should be given some further period of trial and should be reviewed in the light of experience.”