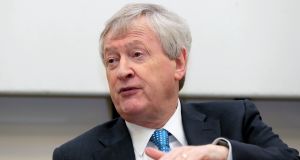 Páraic Duffy chaired the the GAA’s Games Administration Committee at the time of the foot-and-mouth outbreak in 2001. Photograph: Morgan Treacy/Inpho

The 2001 outbreak of foot-and-mouth disease in Ireland was the last time until the current coronavirus pandemic that widespread social restrictions were imposed on sporting activity. It was 19 years ago on Monday that news of a first case of the animal disease in the Republic of Ireland for 60 years was diagnosed on the Cooley peninsula.

There had already been an outbreak across the border in Maigh, Armagh at the end of February that year. Sports had already been called off, starting with the Ireland-Wales rugby match and – in contrast to today – all race meetings.

The following day, on receipt of the news from Armagh, the GAA followed suit and cancelled all its fixtures “in the national interest”.

Such was the potential impact on the agricultural industry that the lockdown came quickly in order to protect Ireland’s status as an FMD-free country.

The task of responding to the GAA’s fixtures difficulties fell on the Games Administration Committee (the old GAC), then chaired by future director general Páraic Duffy, who remembers it nonetheless as a comparatively manageable situation.

This was despite it being an unfortunate time for the disease to strike. The GAA had just switched to a calendar-year league in football and that summer, the first championship with All-Ireland qualifiers was due to take place. Fixtures were as a result very compressed.

“It was nothing like this, for a start,” he said. “It was early in the year and I don’t recall the situation ever creating a sense of crisis like today’s, to the extent that the championships were under threat. You also have to remember that the leagues weren’t as important then, either.

“I was chair of Games Administration at the time and it never felt like it was getting out of hand. It was simply a matter of managing the fixture list and waiting for activities to resume.”

A further case was identified in Ardboe and Tyrone, who would have been league semi-finalists that year, had to suspend their involvement until after the partial resumption of activities in mid-April.

There were also implications for the county’s other teams.

“The under-21 football championship was an issue,” according to Duffy. “I remember Tyrone were in difficulties and Mickey Harte was the manager. First of all the Ulster championship was going to be played without them and then it wasn’t. Eventually they took part and won it.”

It wasn’t straightforward, though. Tyrone were defending All-Ireland champions. They had reached the Ulster final but the Ardboe case was confirmed on the weekend of the match and the county was initially ruled out of any further involvement in the championship.

“The All-Ireland final was due to be played at the end of April,” said Duffy, “but Limerick and Cork [Munster finalists with winners due to play the Ulster champions in the All-Ireland semi-final] both wrote to GAC saying that they were happy to see Tyrone given every chance. We decided to allow the Ulster final go ahead in May and move the All-Ireland back to the autumn.

“Mayo, who were already in the All-Ireland final were extremely accommodating and said that they didn’t want to win an All-Ireland by doing down Tyrone in this fashion. Nobody kicked up a fuss.

“The sense of solidarity, which to be fair is also there at the moment, made our job easier. There was no-one whingeing or complaining about the decisions that had to be taken. It was different because it directly affected one specific area – agriculture – and as you’d expect the GAA with a strong, rural base had no difficulty in deciding that we had to support rural Ireland.”

In the end, matters settled. The exclusion zones and restricted movement helped to stall foot-and-mouth and by June Ireland had regained its status as an FMD-free country.

The qualifiers went ahead and Tyrone ironically fell victim to the new format, winning the Ulster title against Derry but losing to the same opponents in the All-Ireland quarter-finals. But the county did retain its under-21 title the following October, beating Mayo.

Duffy is quick to emphasise that the two challenges aren’t comparable because of both the scope of the current crisis and also the reality for the contemporary association.

“The GAA then was a different organisation in terms of media rights, sponsorship and cost of county teams – all of those things. There weren’t the same commercial challenges either or the range of things for which money was needed and so it wasn’t as big a worry then. This could go on, even into next year – you just don’t know but it isn’t just going to be sorted out in two weeks, four weeks or six weeks.

“Back then, it didn’t seem even at the time to be as potentially catastrophic. That’s the difference.”

The sense of uncertainty about the current crisis makes contingency planning very difficult, as there are no indications when the public health environment will return to normal or when sports activities might resume.

Already the likelihood is that the national leagues are not going to be completed and focus falls on the future for the championship this summer.

“I think there’ll be huge pressure to play it this year if at all possible,” said Duffy. “The provincial councils will want the provincial championships to be played and they can be played very quickly. They could all be played off as knockout in three or four weeks so I think they’ll be very, very slow to abandon those.”

All told the foot-and-mouth disruption lasted just under seven weeks whereas the current restrictions are likely to extend for months. Duffy believes that the hard choices in 2001 were eased by the heightened sense of community solidarity at such times.

“It wasn’t difficult to make decisions around it because people were supportive. I think that will be the same this time. There is that sense of ‘we’re all in this together’ and it’s not just a GAA thing – it’s in the country generally.”