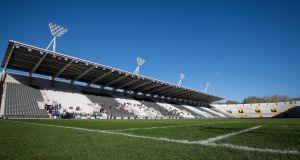 Páirc Uí Chaoimh has been officially cleared for Sunday’s Munster hurling first round match between champions Cork and Tipperary.

It will be open for all of Cork’s championship fixtures, against Tipp and Waterford in hurling and in football, should it be needed in the event of the county reaching the provincial final.

It has been confirmed however that, unlike in the last two years, the stadium is unlikely to be used for the All-Ireland hurling quarter-finals, as a complete relaying of the pitch is to take place this summer once the Munster championship has been completed.

The ground had been closed since the pitch became badly damaged during the Cork-Wexford league match last February in order for remedial work to be completed on the playing surface.

County chair Tracey Kennedy confirmed on Wednesday that the pitch would be ready and in her view “in the best possible condition” for the high-profile start of the championship.

“There’s been a huge amount of work carried out on the pitch since February,” she said. “Growth conditions have been very favourable and there have been definite improvements and we are very confident that the pitch will be in the best possible condition.”

At the time of the closure, county CEO Kevin O’Donovan listed the problems: “There are issues with the stadium in terms of maybe the location of the pitch, maybe, the overarching nature of the main stand, the decisions made during the project to allow machinery to travel over a certain area of the pitch, but we need to grasp all those issues now and deal with it. I believe full [pitch] replacement is the way to go with a hybrid pitch.”

Although the surface will be ready for the coming championship fixtures – as it was for last year’s matches against Clare and Limerick – further work will need to done, according to Tracey.

“This is not a long-term solution. What has been done has remediated the situation we found ourselves in at the end of February when we had a very unstable surface. The stadium board had already decided that there does have to be a complete relaying so that we have a pitch ready for action all year around and not just in the fine weather.

“We envisage the necessary work being carried out in the middle of the summer after we’ve completed our championship season.”

On the subject of Páirc Uí Chaoimh hosting All-Ireland quarter-finals, which it has done in both years since reopening in 2017, she all but ruled out the prospect.

“We think not because the priority has to be to get the pitch prepared for a full year’s activity.”

Munster officials are expecting between 25,000 and 30,000 to attend Sunday’s double bill, senior and minor, between the counties.

Stuart Wilson, Croke Park and GAA NGDC pitch manager, will be visiting all six venues in the company of Dr Stephen Barker of the Sports Research Institute (STRI) to assess the playing surfaces, with a winner to be chosen and announced in the coming weeks.

The awards scheme is part of a wider initiative set to improve the standards of playing surfaces around the country and to share some of the expertise and experience of the Croke Park headquarters team.

The previous winners of the award were Semple Stadium in Thurles in 2017 and Nowlan Park in Kilkenny in 2018.