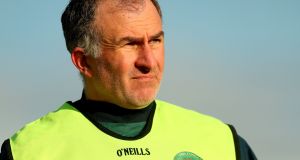 Offaly GAA chairman Tommy Byrne has promised to move swiftly to replace Stephen Wallace as football manager and has accepted responsibility for the failed appointment.

Kerry man Wallace’s reign got off to a promising start five months ago when his team beat Wexford and then came from behind in their first game of 2018 to draw with Dublin in the O’Byrne Cup.

Yet just 133 days later the two-time All-Ireland junior title-winning Kingdom boss, who kept the Faithful County in Division Three of the Allianz League, was sacked following a meeting of officials on Wednesday evening.

It followed the Leinster championship defeat to Wicklow last Sunday and the immediate plan is to appoint an interim boss until the end of the summer.

Former Dublin forward Vinnie Murphy and Niall Hobbert, joint managers of St Peregrine’s in Dublin, and linked with the role when Wallace was appointed, have reportedly been contacted to see if they’re interested.

Tom Coffey filled the interim position before, following the departures of Gerry Cooney in 2012 and Richie Connor in 2009. Peter Brady, John Rouse and Declan Kelly, all well respected locally, might fancy the challenge in the long-term though Pascal Kellaghan, currently coaching Tipperary, appears the supporters’ favourite having been overlooked when Wallace got it.

“It is our job to provide a proper situation and a proper [management] team around them to play and we will be endeavouring in the next few days to put together an interim team to take care of the county team until the end of the Championship,” Byrne told Midlands 103 Radio.

In a separate interview with Newstalk, Byrne said he took full responsibility for Wallace’s appointment though answered simply “no” when asked if any officials would actually resign.

Asked if he was essentially saying there’d be no repercussions for the county board, he replied briefly again, “Yes”.

The beginning of the end for Wallace came just weeks after that Dublin draw when Offaly lost heavily to Longford in round one of the National League. At one stage in that midlands derby, Offaly trailed by 19 points.

Meanwhile, in Tipperary, Offaly’s neighbours to the south, Kellaghan hit the ground running as the Premier’s new coach with a big round-one win over Cork in Division Two.

Kellaghan, the former Offaly player who has impressed as a coach both inside and outside of his county, was the man many believed should have got the job that went to Wallace. There will be renewed calls now for Kellaghan to be belatedly installed though given his ties to Tipperary, and the plan for an interim appointment, it’s unlikely to be until the 2019 season, if he’s interested at all.

It doesn’t help going forward that teenage sensation Cian Johnson, who scored 0-6 against Dublin, will be ineligible for senior Championship duty until 2020. The Ferbane player is sitting his Leaving Certificate and a local rule states that all players eligible for the new U-20 grade must play exclusively at that level.

Wallace noted the irony that it was a 19-year-old, goalkeeper Mark Jackson, that impressed most for Wicklow in last weekend’s shock win for the Division Four underdogs.

Byrne stated that the suspension Wallace is serving following an incident in a club game in his native Kerry, ostensibly preventing him from training the team, prompted the sacking.

“The main reason is that Stephen unfortunately is suspended for a considerable length of time and we find it would be a very difficult job for anyone to manage the Offaly senior team properly while not being able to take part in the process,” said Byrne.

Wallace retorted in a separate interview that there has been ongoing “sagas and battles” between the players/management and the county board in recent months.

“Absolutely, we’ve had ongoing sagas and battles and every week there were issues, every day there were issues,” Wallace told Newstalk. “Players constantly feeling that they’re not getting what they deserve from a county board perspective and me as manager I’m in the middle of that. I’ll stand up for my players every day of the week and maybe that was the problem, that I was looking for too much for the players.”

Offaly are due to return to Championship duty on June 9th in round one of the All-Ireland qualifiers.

Wallace was without Niall McNamee who retired after a lengthy county career following last year’s Championship while Johnny Moloney quit in February due to an apparent row with management.

The change of management may convince Moloney to return for the back door series as the county attempts to pick up the pieces following a disastrous episode.