Motion to bring mark into Gaelic football approved by GAA 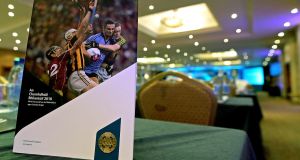 The GAA has voted to introduce the mark into football.

A presentation by Jarlath Burns, chair of the Standing Committee on the Playing Rules, emphasised the spectacle of the high catch and the danger of the skill becoming obsolete. Arguing against what he described as “an obsession with possession”.

Burns said that time on the ball had doubled in the past 20 years from 10 seconds to 20 seconds. Unless something was done to protect the high catch, he argued, it would become obsolete like the drop kick. There was one argument against the proposal, from Cork’s Diarmuid O’Donovan who said that the mark would slow down the game. He cautioned against passing the motion without adequate trials.

Under the new rule, a player catching the ball cleanly from a kick-out after it has been travelled at least as far as the 45-metre line without touching the ground has the option of taking a free kick or playing on.

Meanwhile, the GAA has voted against bringing forward the football and hurling All-Ireland finals.

The motion provided that from next year the football final would take place on the first Sunday in September with the hurling two weeks previously. Proposed by Connacht’s Mick Rock, this was another of the suite of proposals arising from Director General Páraic Duffy’s discussion paper on burn-out, over-training and club fixtures and is/was intended to allow more time for club fixtures.

The motion was rejected by 61-39 (failing to reach two-thirds majority).

Onto motion eight and there will be no reduction in the number of replays in the GAA championships. Another of the burn-out and fixtures proposals, this motion proposed that extra-time be played in all inter-county matches apart from All-Ireland and provincial finals.

Opposition was on the basis of the loss of promotional opportunities provided by replays and the loss of finance. In replying to the motion Director General Páraic Duffy said that replays in the past five years have contributed just 3.34 per cent of attendances out of a total of 7,190,000. The motion failed however to get a sufficient majority.

It was rejected by 58-42 (failing to reach two-thirds majority).