McGuinnes bringing Donegal back in through the out door

Faced with a Derry team that hold onto the ball for longer than a Led Zeppelin back-catalogue, Donegal manager Jim McGuinness cut his cloth accordingly 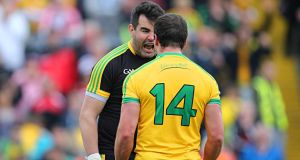 Everything we’ll watch between now and the first week of August in the football championship will be processed through the prism of Dublin - they’re the dominant force in the sport right now, and the road to the All-Ireland unquestionably goes through them. But in the immediate aftermath of Donegal’s win over Derry in Celtic Park on Sunday, that genuinely didn’t appear to be the case for Jim McGuinness, or his players.

They had been focused since the draw was made on Derry, and hadn’t looked a whole lot beyond it (in that strange way that GAA teams look ahead to one game, and one date in the calendar, for eight months, and then have a fortnight or three weeks to prepare for every other game).

McGuinness referred in numerous interviews after the game to Derry’s possession football and to the number of handpasses they use - an indication perhaps that what we saw from Donegal on Sunday may not be what we see from them in the coming months. This sort of tactical flexibility is common in rugby, and Davy Fitzgerald said last year that Clare had six game-plans, ready to use whenever the occasion demanded it . . . so we should infer that, next time around, we might see something quite different from his team.

Pragmatism is at the heart of good management, and McGuinness is the arch-pragmatist. Shorn of his first-choice midfield, up against a team who hold onto the ball for longer than most songs in the Led Zeppelin back-catalogue, he picked a way to play that offered his team the best chance at victory.

So, even if he can’t, we can afford to look at the bigger picture and ask what we learnt about Donegal and their chances of getting back to their 2012 levels of production from their performance in Derry City on Sunday.

Certainly a fit Karl Lacey transforms Donegal - he, Anthony Thompson, and Frank McGlynn are the lungs of this team. From a county known for its political contrarianism, Lacey is the archetypal bellwether state . . . if he is playing with energy and with tempo, Donegal will invariably go well. The number of times one or more of those three got ahead of the ball on Sunday would suggest they have got some of the energy back in their legs, something which wasn’t just absent last year, but was also absent in the Division Two League final against Monaghan last month.

We see plenty of half-back lines streaming forward these days - what sets Lacey and his cohorts apart is the comfort with which they operate inside the opposition 45. They can pick their moment to shoot, but they are also confident when trying the low-percentage pass, which is something you just don’t see from enough half-backs in that position. The pass from McGlynn to Leo McLoone, who despite wearing number six was playing in the half-forward line by then, had to be timed and delivered to perfection, and it was. He had options but he chose the killer one . . . that alone bodes well for Donegal.

Whether they’ll be good enough for Dublin is another matter. The game has moved on quite a bit from that 2011 semi-final that so horrified the nation . . . but so too have Donegal. If they could have left Michael Murphy on the edge of the square for the full 70 in Celtic Park we might be a lot more bullish about their chances this week - as it was, without Neil Gallagher and Rory Kavanagh, he was putting out fires all over the pitch. With their first-choice midfield back in harness, Murphy will be closer to goal and as well as being a far greater threat himself, he’ll be much more likely to bring Paddy McBrearty and Colm McFadden (scorers of a grand total of 0-1 between them on Sunday) into the play.

We saw last year that even the brightest of Dublin’s young graduates weren’t nearly as able to impose themselves on games once they reached the wintry side of the August Bank Holiday weekend, and if even one or two of them are shifting uncomfortably in their sleep this week, then Donegal will have done enough. Then again, Eoghan O’Gara and Diarmuid Connolly up against the McGee brothers would give Froch/Groves a run for its money. Jim Gavin might just have been given something to think about.

Thanks to everyone who got in touch with me in relation to last week&#8217;s column on Colm Begley, and his travails trying to balance his club and county commitments. There was an interesting addendum to that story this week, involving Galway footballer Tom Flynn, who also plays hurling with his club Athenry. According to Athenry, they had reached an agreement with the Galway football management that Flynn would play in their senior hurling championship game on Friday evening, but that the terms of that arrangement were changed late in the week.

Flynn was pulled from the Athenry line-up, they lost the subsequent game by two points, and then watched as Galway were far too good for London on Sunday, winning by 3-17 to 0-7 in a horribly one-sided game. It showed Galway’s (unfounded as it turned out) nervousness ahead of the match that they would protect Flynn in that way . . . but this problem is going nowhere.

Ciaran Murphy is part of the team behind Second Captains, available on irishtimes.com/secondcaptains every Monday and Thursday