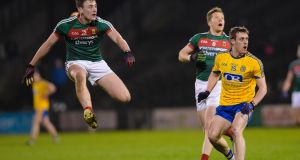 Mayo’s Diarmuid O’Connor scores a point against Roscommon in the last round. Mayo haven’t beaten Dublin in 10 attempts in the Jim Gavin era. No better time to start. Photograph: Inpho

Division One Cavan v Donegal, Breffni Park, 7.0, Eir Sport 2 Last week’s postponement means Cavan are setting out now on a spell of five games in five weeks, with away trips to Tyrone and Mayo followed by Kerry at home and Roscommon away on the last day. You’d imagine that means two home points here are pretty much non-negotiable if they’re to stay up. Jack Brady and Cian Mackey are back in contention, which can only help. Donegal are still awaiting Karl Lacey’s return but look to be on an upward curve and will fancy this. Verdict: Donegal

Dublin v Mayo, Croke Park, 7.0, Eir Sport 2HD Lies, damn lies and whatever you’re having yourself. The Dubs are 32 games unbeaten right enough but they’ve also only won two of their last five games. That might sound like mischief making but if the putative injury-list is to be believed, we won’t be seeing many or most of Jack McCaffrey, James McCarthy, Cian O’Sullivan, Paul Mannion or Jonny Cooper here. Mayo haven’t beaten them in 10 attempts in the Jim Gavin era. No better time to start. Verdict: Mayo

Tyrone v Monaghan, Healy Park, 7.0, Eir Sport 1 Assuming this game survives the rain – and last Sunday’s farrago doesn’t exactly augur well – Tyrone will be licking their lips at the thought of putting manners on a resurgent Monaghan side. Hauling away wins in Castlebar and Killarney in their knapsack, Monaghan’s form will have Mickey Harte’s side well-warned. The blossoming of Jack McCarron has been a long-time coming and he’ll have his mettle severely tested here. Verdict: Tyrone

Division Four Limerick v London, Gaelic Grounds, 7.0 A quietly under-rated story of the league is the fact that London aren’t bottom despite playing every match away as Ruislip gets a facelift. It may tell here against a Limerick side still waiting on the first points of 2017. Verdict: Limerick

Sunday Division One Roscommon v Kerry, Dr Hyde Park, 2.0 For a team that ought to be maturing reasonably well by now, the physical disparity between Roscommon and Mayo last Saturday night must have been concerning for Kevin McStay. Time and again, they were just blown aside by oncoming runners, a problem that can’t be solved quickly. Just now, it’s hard to work out where points are going to come from in this division. After back-to-back defeats, Kerry will be in no mood to donate them. Verdict: Kerry

Division Two Kildare v Fermanagh, Newbridge, 1.0 Moving Day in Division Two, where top and bottom are separated by three points and a win can lift a team from the drop zone to the promotion race. Kildare are the top scorers in the country but still haven’t shaken their vulnerability in possession of a lead. Fermanagh have shown few signs so far of being potent enough to take advantage. Verdict: Kildare

Clare v Cork, Cusack Park, 2.0 Inasmuch as you can trust any formline in this division, Cork seem to be rounding into some sort of decent shape. They put Fermanagh away last time out with most of their first choice forward line coming off the bench so they’re not stuck for depth. Clare got a tanning against Galway and could be in for another one here. Verdict: Cork

Meath v Galway, Páirc Tailteann, 2.0 Someone had to give Down their first win in two years and maybe we shouldn’t be too surprised it was Meath who obliged. They’re conceding an average of over 16 points a game and you’d imagine Galway, with all the Corofin players in situ, will take full advantage. Verdict: Galway

Derry v Down, Owenbeg, 2.30 Even allowing for a win apiece last weekend, this is a relegation six-pointer (well, four-pointer but let’s not split hairs). At least one of these sides will likely be relegated so this could work out as a de facto play-off. Derry were terrific last week and even without the late goal would have had fodder for the road ahead. As a starting point, it looks more real than Down’s win over Meath. Verdict: Derry

Division Three Tipperary v Longford, Semple Stadium, 1.0 Quite the win for Tipperary in Portlaoise last Saturday, where Brian Fox and Robbie Kiely were outstanding. They have the beating of Longford, who have been hot and cold so far. Verdict: Tipperary

Armagh v Offaly, Athletic Grounds, 2.0 Armagh are the team to watch if you want to see goals – 11 have been scored in their three games (five for, six against); the next highest anywhere is Donegal’s eight (three for, five against). With Jamie Clarke back on song, they should put Offaly away handily enough. Verdict: Armagh

Louth v Antrim, Drogheda, 2.0 Colin Kelly’s young side have lit up the league but this could be a sticky proposal against an Antrim side that posted its first win against Sligo last week and have experienced players returning. Verdict: Antrim

Sligo v Laois, Markievicz Park, 2.30 Laois were promotion favourites but they’re conceding at an alarming rate and will lose touch if they don’t get their act together soon. Sligo can put clear water between these two with a home win. Verdict: Sligo

Wicklow v Wexford, Aughrim, 2.0 Wexford are going through this division like a dose of salts and have far too much in hand for Wicklow. Verdict: Wexford

Leitrim v Carlow, Páirc Seán Mac Diarmada, 2.0 Carlow must be kicking themselves for the home defeat to London, otherwise they’d be well set for a promotion kick. They won here last year though, so you never know. Verdict: Carlow

Waterford v Westmeath, Fraher Field, 2.0 A chance for both sides to claim the upper hand in the race to come second. Waterford gave Wexford plenty of it last week but John Heslin is motoring again and should be the difference. Verdict: Westmeath