Martin Clarke's retirement is a sadness for everyone interested in football 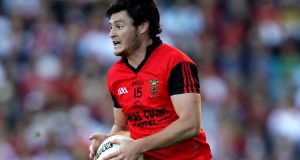 Martin Clarke was a key factor in Down reaching the All-Ireland senior football final in 2010. Photograph: Cathal Noonan/Inpho.

As a silent commentary on how Down football in the space of little over six years went from being within centimetres of an All-Ireland to celebrating a first win in two years last weekend, the retirement from football of Martin Clarke at 28 is none the less eloquent.

He embodies all of the unfulfilled potential of a team that came from nowhere in the 2010 championship - losing that year's All-Ireland final decider - only to return there almost as quickly.

Clarke was a remarkable talent – Armagh’s Aaron Kernan remarked that he had been the most gifted schools’ player he’d ever seen – and although his forced departure from the game on medical grounds because of Addison’s disease felt like closing the hall door on a derelict mansion, it is worth celebrating his performances as forward orchestrator in the county’s run to the All-Ireland final.

An intermittent career with Collingwood in the AFL also played a significant role in curtailing his intercounty appearances.

Having won a minor All-Ireland with Down in 2005, he impressed the Australian scouts almost immediately and having signed with Collingwood a year later, he made an extraordinary quick transition to the new game, debuting in the AFL within 12 months of arrival.

His ability to translate his native football skills into the Australian game was one of the prompts for his Collingwood coach, Mick Malthouse’s coining the memorable phrase “the Gaelicisation of AFL”.

Speaking as Australia coach for the 2010 series in Ireland – the only one in which Clarke would play – Malthouse singled out his former charge.

“I’ve had first-hand experience of a Gaelic footballer, Marty Clarke. He came across and showed our boys how to kick a football correctly – an oval ball he hadn’t kicked as a kid like our players. There’d be very few at Collingwood who could kick a ball better than Marty Clarke. He’s a superb athlete.”

The previous year, the 2010 All Star had come home to Ireland to settle and play for Down. The team, managed by James McCartan, was promoted from Division Two and took off on a run through the qualifiers and caused a sensation when defeating All-Ireland champions Kerry in the quarter-finals – maintaining the county’s extraordinary 100 per cent championship record against the game’s leading county.

After the semi-final victory against Kildare, this newspaper’s football analyst John O’Keeffe paid the following tribute: “It’s impossible to overstate the contribution of Martin Clarke, the game’s outstanding performer. His vision and array of passing is the best in the country at the moment.

“His skill set allows him to gather ball, weigh up the options and distribute possession before he’s even fully upright. His ability to kick scores and find team-mates was instrumental to Down’s success.

“The other Down forwards act as satellites with Marty Clarke as the hub. Whoever persuaded him to come back from Australia performed a massive service for the county and there is no doubting that he came back a better player.”

He went back to Australia but the second coming never really fired and he returned in 2014 but illness made intercounty football too much of a stretch.

Good form with his club An Ríocht and Queen’s in the Sigerson couldn’t delay the inevitable but his retirement is a sadness for everyone interested in football.