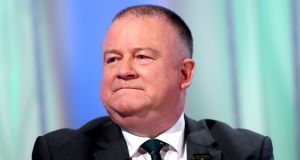 Jim Bolger: “We would be mindful of counties who have legacy issues with the All-Ireland B and the Tommy Murphy.” Photograph: James Crombie/Inpho

Leinster chair Jim Bolger, an ex officio member of the GAA’s Management Committee, says that there isn’t a consensus at present on the subject of a tiered championship in football.

The concept of a graded All-Ireland goes before this weekend’s meeting of Central Council, which has a big agenda, including the experimental football rules and any tweaks to the senior championship format.

“There are mixed views on the second tier,” he said at the launch of this year’s Leinster club hurling final, which took place in Dalkey Castle, Co Dublin on Thursday.

“The wider football fraternity feels there is a need for a second tier; we would be mindful of counties who have legacy issues with the All-Ireland B and the Tommy Murphy, and some counties have very bad experiences there, legacy issues.

“If we come up with the right format, that it will give all counties a chance to play provincial: one or two proposals about Division Three and Four reverting to a B if they are knocked out.

“When we compare with hurling, [there are] five tiers . . . and that has been reasonably successful. But there is a question of space and exposure. I am sure the football counties will have looked at the Joe McDonagh [this year’s new Tier Two hurling championship] which is a very good competition, great standard and very evenly-matched teams.

“But because the hurling championship proper took up a lot of media space, and television time, there was little exposure and I am sure football counties who are reluctant about Tier Two are looking at that, and the exposure the Joe McDonagh got last year. I think we know the answer ourselves in that regard so a lot of challenges there.”

Bolger is acutely aware of the divided opinion on the subject, as his own county, Carlow’s, footballers are opposed to the idea of a graded championship.

In respect of next year’s provincial championship, the Leinster chair reiterated that All-Ireland champions Dublin’s matches could be played in only four venues outside of Croke Park, O’Connor Park Tullamore, Portlaoise’s O’Moore Park, Wexford Park and Nowlan Park in Kilkenny.

He said that there was a cost when Dublin were taken outside of Croke Park but that it was of promotional benefit and that Dublin would play Wexford in Wexford Park if that is the quarter-final but that Louth would not be able to exercise home advantage if they beat Wexford.

“If it is Wexford, it will be Wexford Park. If it is Louth, it will be in Portlaoise. We do take a financial hit. The numbers are smaller when we take Dublin out of Croke Park but we do it for promotional aspect and we are mindful of sponsors and giving a boost to a provincial town or venue which hasn’t had a big game for years.”

Bolger also expressed his support for the secondary provincial competitions, such as the O’Byrne Cup and Walsh Cup, despite scheduling difficulties that arose in the bad weather earlier this year.