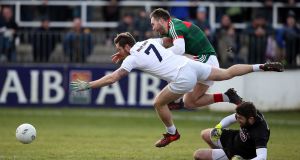 Mayo eased their relegation fears as they pulled clear of Kildare in the second half in Newbridge but the same couldn’t be said for the home team as their relegation to Division 2 was all but confirmed after their fifth successive defeat.

Kildare would have been pretty pleased with their start to the game and a expertly taken goal by Daniel Flynn in the 22nd minute put them two points ahead, but they failed to scored in the remainder of the half.

Mayo pulled back level but did real damage in injury time by scoring 1-2 to lead by five at the break and the game turned into a very one-sided affair in the second half.

Coming into the game, both sides were fully aware of how important a win could be and Kildare knew that their first win of the season would see them leapfrog Mayo and move out of the relegation zone.

Stephen Rochford’s team started with great intent and scored the first three points of the game inside the opening 10 minutes but over the next 12 minutes, Kildare played their way into the game.

Kevin Feely and Kevin Flynn, on his first league start, cut the gap back to one point before Mayo stretched that lead to 0-5 to 0-2.

Niall Kelly saw a great goal chance saved by Rob Hennelly during that spell but Kildare got their noses in front through points from Feely and Paddy Brophy and then that Flynn goal.

It wasn’t the scores that Kildare got which were more important, but rather the ones that got away. They kicked eight wides in the first half and were made to rue those opportunities when two Cillian O’Connor points, one a magnificent effort from outside the 45, got Mayo back on level teams.

The visitors sensed their chance and poured forward late in the half. Adam Gallagher put them ahead in the dying seconds of normal time but it was Aidan O’Shea’s goal that really hurt Kildare’s chances.

Lee Keegan was able to reach the end line too easily and he cut the ball back for O’Shea to fist into the net. Diarmuid O’Connor added a point and suddenly from a place where the game was level in the last minute of normal time, Mayo led 1-9 to 1-4 by the half time break.

While the first half was a thoroughly competitive and entertaining fare, the second half turned into a procession with Kildare seemingly accepting their fate long before the final whistle. Indeed, were it not for a string of saves by goalkeeper Mark Donnellan the gap by the final whistle would have been far greater.

Kildare got to within four points of Mayo seven minutes into the second half but that was as close as it got and with the likes of Kevin McLoughlin, Aidan O’Shea, Andy Moran and Lee Keegan pulling the strings, Mayo ran out comfortable winners.

Although Kildare could still avoid relegation if they record big wins in their last two games – away to Kerry and home to Galway – in reality their fate is sealed and they will be playing Division 2 football next season. They will reflect on games earlier in the campaign when they were narrowly beaten by Monaghan and Tyrone but they could have no complaints on Sunday as they were outclassed in the second half by a Mayo side who will be targeting moving up the table in their final two games.