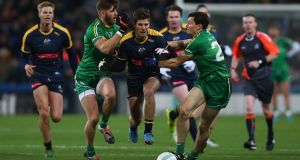 “Of course, we were worried,” said manager Joe Kernan of the second-half fade-out. “We lost our composure, I think we gave the ball away seven times coming out of our defence, which was a mortal sin. But just when we needed it most, Gary Brennan had a fantastic last quarter. His three catches were unbelievable and I think everyone in the whole country would be proud of him.

“We recomposed ourselves and won four or five balls in a row, which slowed it down and we regained it.”

It was clear that Kernan and the players had learned a great deal from the setback in last year’s Test in Perth when Paul Earley’s team got off to a poor start that wasn’t recoverable, even with a strong second half.

They didn’t allow Australia the flying start that had effectively won the match in 2014 and were vastly more economical than their opponents.

“I think the overall possession was 380 to 240, so we controlled the ball,” said the visitors’ coach Alastair Clarkson. “Forty-seven times the ball went inside 20 metres of their goal; they were only 27. So we had significant opportunity. Just couldn’t convert some of those chances.

“The Irish played particularly well. Controlled it at different stages. We just rushed a little bit more than they did at crucial stages. Just fell short in the end.”

There were a few reasons underpinning the home success. Firstly, an improved defence meant that Australia weren’t able to get into a scoring stride in the early stages. Rory O’Carroll at full back and his fellow backs scrambled hard to prevent easy marks and it wasn’t until the second half that the AFL team began to find any sort of rhythm.

Secondly Ireland managed to replicate the strong points of last year, especially ball winning. The 45-metre requirement for kick-outs had been expected to benefit the Australians to a great extent but in the second year of its implementation the home side again fared well.

Despite height disadvantages, Ireland did well on re-starts. Aidan O’Shea, who had a super match switching between the full forwards where he plundered two goals – six pointers – and centrefield where he plucked down a number of balls.

Goalkeeper Niall Morgan’s kick-outs were also excellent, calmly taken and well placed. He also had a good match in fulfilling the primary function – a terrific save just before the end of the first quarter pushing Jake Stringer’s shot out for a behind (one pointer).

Kernan’s stated intention had been to rely on traditional Gaelic skills by getting ball into a lethal full forward unit where Bernard Brogan and Conor McManus complemented O’Shea’s rampaging interventions. Between them they supplied 45 of Ireland’s 56 points.

They were facilitated to an extent by Clarkson’s taste for running a high line in defence and at times the Ireland forwards were isolated in acres of space as the Australians flooded up in full-court presses.

Brogan caused a great deal of alarm when in space and but for a smart intervention by Robert Murphy would have been in for an early goal. The captain contented himself with a couple of overs to keep the scoreboard moving in situations when goals might have been on but the margin was expanding all the time.

Like last year, the match was settled by early superiority. Ireland’s three goals came in the first half – O’Shea following up for two of them and McManus converting a penalty after the only negative incident of the evening saw Donegal’s Patrick McBrearty pushed into a goalpost as he was putting the ball in the net.

According to Kernan, the player was hospitalised for scrutiny of a bang on his shoulder and also to investigate potential kidney damage.

By half-time Ireland were 20 ahead, 43-23, and cruising. The attacking conversion rate was excellent with just one wide (admittedly about 12 metres wider than in the GAA game) and one behind.

Australia steadied the match in the third quarter, shaving nine points off the lead and showcasing Nick Riewoldt’s marking ability, as the St Kilda forward ended the quarter with seven points from a couple of really good catches.

Australia were pushing forward to the extent that goalkeeper Dustin Fletcher played almost as a seventh defender.

Ireland looked to be just marking time themselves when playing cautiously through the final quarter, but the match lurched into uncertainty when Eddie Betts was able to scramble Andrew Gaff’s dropping ball into the net when going above the Irish defence, with Jarryd Roughead and eventually being credited with the goal.

A behind quickly followed and there were just three points in it with as many minutes left.

Ireland responded impressively. Brennan took three great catches to ease pressure and the urgency returned. Brogan registered the last score and beat O’Shea to the GAA medal for the series – to the surprise of Clarkson afterwards.

Harry Taylor won the Jim Stynes medal for Australian player of the series.