Jim McGuinness: Being obsessed in sport is not a bad thing 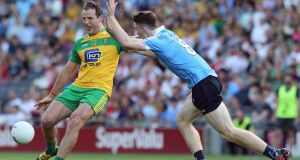 Donegal’s Michael Murphy: “The best player in Donegal for the last number of years has been Murphy and I don’t know anyone as obsessive about the game as him.” Photograph: Lorraine O’Sullivan/Inpho

Icame in from work on Sunday and sat down to watch the All-Ireland hurling final. It was our first time as a family watching a final outside of Ireland and when I heard Marty Morrissey’s radio introduction to the occasion later, it struck a chord.

In its own way, the All-Ireland is a global tradition and probably matters more to the people thousands of miles away from Croke Park than those fortunate enough to be there.

Even watching on television you could sense that in Croke Park, there was a truly electric atmosphere, that Kilkenny were primed for the game and weren’t about to yield anything easily and that it was a moment of truth for Tipperary.

So we were watching this and it got me thinking about the extraordinary level at which these guys are playing their sport. It was a feast of hurling and as an occasion, it kept on giving more and more: Kilkenny’s goal, Tipperary’s reaction to that, the tenacity and athleticism and then the absolute brilliance of the finishing from both teams.

It all made me think about the standard at which they are playing their game. Achieving this level: that is why Kilkenny have won as many All-Irelands as they have. That is why Tipperary can come back and topple Kilkenny and set about extending their tradition.

But where does this tradition come from? For me, it comes down to technique which translates to a skill level on the field, which in turns adds up to results which then creates tradition. Then, over time, through that tradition – the expectation of winning – you become an established county.

The same was true in the Dublin-Kerry football semi-final last week. The coaching that was on show and the skill under pressure: the fundamentals of catching and kicking and scoring, all of which look sublime when executed at speed and under pressure in a heightened match situation in front of 80,000 people.

The four managers – Michael Ryan, Brian Cody, Jim Gavin and Éamonn Fitzmaurice – have all won All-Irelands themselves. They had that talent and they are inheritors, interpreters and facilitators of their county traditions. So it is obvious that these players are very, very good, that they touch on brilliance. But how does this happen? It’s not magic. And I began to think about what goes on behind the curtain in these counties.

I thought about Jason Denayer. Most soccer fans will know he was 19 when he made his professional debut at Celtic playing beside Virgil van Dijk in the heart of the defence. He won Young Player of the Year in Scotland and was in the team that won the league and league cup in the 2014/15 season. He is a Belgian boy.

Instead, it is all about small five-a-side games focused on technique, rather than winning and losing. They train barefoot to improve their touch and the entire focus is on mastering the basics of the game.

Denayer’s day started at 7am and finished at 10.30 at night. That’s some going for a 13-year-old. Then they had 90 minutes to call family and friends and relax.

Interestingly, Éamon McLoughlin, the former League of Ireland player, was in Belgium at the time scouting players in his role as an agent. He inquired about the best young players at JMG and ended up representing Jason. I happened to be sitting beside Éamon McLoughlin at a Celtic game and he told me the story.

He took Jason to England and when he was setting up the trial at Liverpool he said: “I have the best 17-year-old in Europe.” But the Liverpool representative just flat out rejected that idea.

“No you don’t because if you did we would know about him.”

But they didn’t as he was never seen: he was in an indoor hall in bare feet in Lier. Then they took him to Manchester City and some of the first-team players recognised the JMG tracksuit because Guillou has academies in Africa and across the world and they were straight up to him.

So you talk about development and bringing players through and here was something completely left-field and different to the orthodox apprenticeship system.

Denayer is on loan from City with Sunderland this year and will have a big career. For some reason the emphasis on technique in Sunday’s hurling final and in the Dublin-Kerry game reminded me of the work Denayer had put in – and the coaching he received – in order to become a professional soccer players.

It makes me wonder: what do we need to do to develop our players in the GAA? Money is important, but it is not an insurmountable obstacle.

It is about putting the emphasis on a framework which can help to instil a certain skill level in players. If you get a group of people within a county or club with the right intentions, anything is possible. By right intentions I mean: you aren’t in it for your own good but for the good of the overall project.

How do we set about developing players that can step into an arena like Croke Park and play like Seámus Callanan or Bernard Brogan? What framework will allow players to develop their technique? That’s a question which, I feel, should be central to conversations in county boards.

It’s also an individual thing. I often think of Jeremy Lin, the NBA basketball player. His rise from nowhere is a classic underdog story. He was knocked back many times and every time, he increased his work ethic, his desire and his training.

He upped the ante and he didn’t take the repeated failures as rejection. They were simply markers on his way to getting where he wanted to go. Lin had technique but clearly not the skill level to convince a succession of NBA scouts that he had the stuff to make it. But he did make it.

In order to succeed and thrive at the highest level, a player needs Lin’s motivation and the framework that Denayer received as a young boy. You need that within the players, yes, but also within the organisation.

If you can produce a number of players with those attributes, then all of a sudden you have a team. If you have another team coming behind them and another behind them, you can think about building a tradition.

Tyrone is an example of a county that did this. Before 2002, they had nothing really to point to apart from sporadic Ulster titles. Since then, there has been huge methodology. They have had great football men, but I think Mickey Harte brought that sharp edge of ambition.

Here is something worth saying: there is nothing wrong, in my eyes, about being obsessive about your sport. That idea and that word is something that some people are afraid of in the GAA.

Returning to Gaelic games, the best player in Donegal for the last number of years has been Michael Murphy and I don’t know anyone as obsessive about the game as him. It’s just a matter of applying a simple idea: I am going to make this the focal point of my life for the next few years. Utter single-mindedness. If you have a set number of people on a county board locked into that frame of mind and coaches with the same mentality and the patience to transfer that to players, you had better wait to see what will happen.

So it’s All-Ireland Sunday and you look at Tipp and Kilkenny and you think: wow. And the same with Kerry and Dublin. But if you just sit back and go wow, how do you match them? How do you become like them? Because that is the challenge, whether people want to face it or not.

I think it is a matter of joining the dots between technique and players and the development of a team, which breeds victories and then, finally, that vague concept of tradition. I believe there is a potential Seámus Callanan or a potential Kevin McManamon in every county in the country. But the sad thing is that they may never even play the game.

Sometimes when things start to wane, more and more people start to step away because they don’t see the risk-reward as being in any way beneficial. Everyone wants to back a winner. Who doesn’t want to be part of the Tipp or Dublin project now? But you have to start somewhere.

So it is Tuesday in September and we have seen an amazing All-Ireland hurling final and a potentially brilliant football decider to look forward to. What a standard. What a brilliant reflection on the state of both national games.

But are we going to accept that this is the prevailing order always and ever? Or are we going to try to maybe take a little bit of inspiration from elsewhere and see what we can do about trying to match the very best in our games?