Wexford prove too strong for Kilkenny 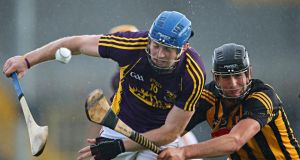 Wexford 2-14 Kilkenny 0-10
A brace of second-half goals saw Wexford blast past the challenge of Kilkenny and race into the Leinster under-21 hurling semi-finals.

The reigning champions always looked to have the measure of their hosts at Nowlan Park, but it wasn’t until Peter Sutton and Rhys Clarke raised green flags that they finally managed to shake the Cats off.

Sutton’s 53rd minute goal all but put the seal on the game, as it boosted Wexford’s lead to seven points (1-12 to 0-8) with as many minutes left on the clock.

The second big strike from Clarke, which arrived four minutes later, made sure that the Model County would go through to play Offaly in the semi-finals.

Kilkenny might have had the advantage of the wind in the first half, but they failed to make good use of it.

With Wexford opening the better of the two sides, the Cats didn’t got on the scoreboard until Richie Reid converted a 25th minute free.

By that stage Wexford had notched up five points through Pádraig Doyle and Jack Guiney (2), Aidan Nolan and Kevin Foley.

While Reid added another free before the interval, Wexford still led by three at the break (0-6 to 0-3).

The sides remained relatively close in the second half. Guiney and Mark Mansfield traded early points, but while Kilkenny were able to close to within two points at one stage Wexford were always able to keep them at bay.

Andrew Kenny pushed Wexford four points clear with under 10 minutes to play, but that late double-whammy of goals spelled the end for Cats.