Waterford still look to have a bit more in hand 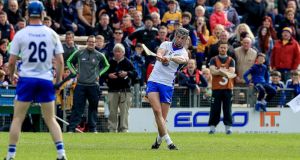 A draw may have been a fair result in last week’s final but a first replay since 1993 was the outcome neither side wanted with their Munster semi-final now less than a month away. There were consolations for both teams.

Clare fielded understrength but battled throughout and also led for most of the match.

Waterford however never allowed them out of their sight, timed their scoring charge well at the end of normal time and persevered at the death to earn the free that tied up matters.

The teams took a lot of heat for the tactical stalemate and the aesthetic cost of that congestion, especially in the first half. But that’s how the modern game operates – making it difficult for opponents to find space and scoring opportunities. Bearing that in mind, Waterford can feel happier.

Their squandering of frees – they missed nine compared to Clare’s one – should depending on whether he starts or not be addressed to some extent this weekend by the return of Maurice Shanahan, whose poc fada to earn the draw showed his team-mates how it’s done.

Clare have their own consolations. They weren’t and won’t be at full strength but competed all the way through 90 minutes. They had what looked for a long time like a defining advantage in the accuracy of Conor McGrath and their conjuring up of the free that gave him the chance to force extra time was a classic of controlled urgency even if Tadhg de Búrca was a little unlucky to concede the foul and McGrath still had it all to do off the tee.

David Fitzgerald’s team will also be hoping for better form from their other forwards, who shone brightly against Kilkenny in the semi-final and will want to address the suspicion that the All-Ireland champions not being in top gear might have had something to do with that.

Tony Kelly will have picked up tempo with his first starting – and finishing, as he played the full hour and a half – role since January and that will enhance Clare’s challenge.

Podge Collins was tied up marking Austin Gleeson and if that worked quite well it also defused his scoring threat.

Waterford will be making at least one change with Shane Fives, who was excellent the last day, unlikely to be fit. Conor Gleeson is mooted as the likely replacement as he was in the drawn match given his mobility. Manager Derek McGrath has been experimenting with options in the league and in the past two matches deBúrca, last year’s sweeper par excellence, has taken up man marking with Darragh Fives playing the free role.

The holders can also get more out of Colin Dunford, who laboured a bit after getting clattered by Kelly in the first half but whose running up until then had troubled Clare. There is so little between the teams and so little likelihood of much variation in approach that calling it depends more on throwing the dice than calculus.

The feeling however that Waterford had a bit more in hand going into last week remains unchanged.

Henshaw the only change as Andy Farrell names Ireland team for Paris 12:41
Warren Gatland: England players could miss Lions tour if not released for Japan warm-up 12:19
LA Dodgers land World Series to end 32-year drought 08:38
MCG could welcome 25,000 fans for Boxing Day Test 08:21
Gordon D’Arcy on a Halloween thriller; Will an empty Hill derail the Dubs? 07:51
Crossword Get access to over 6,000 interactive crosswords