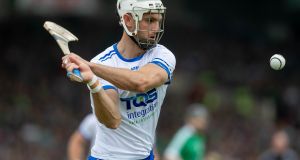 Waterford have been handed a boost in the run-up to Sunday week’s All-Ireland hurling final with the news that corner back Shane Fives is fit again and available for selection after missing the semi-final win over Kilkenny last Saturday.

Team manager Liam Cahill was speaking to media at the county’s pre-All-Ireland briefing in Fraher Field, Dungarvan and said that the player, who had been having a fine season, had recovered from a late injury sustained in November against their final opponents Limerick.

“He’s back from injury after the Munster final and is training well. He’s putting himself into contention for the All-Ireland final, for selection. Everybody else is fine as of now. We still have a number of training sessions to get through and we just hope that everyone gets through those, okay.”

Cahill was also pleased that the exit from Level 5 restrictions had allowed teams to bring their full panels to the remaining matches in the championship.

“It’s brilliant news, I’m delighted to be able to bring all our panel to Dublin for the All-Ireland. It’s been tough going to date – I think that’s been well aired by a lot of managers to date. I think it’s well done to everyone concerned for making it happen.”

He also agreed that the minimalist trappings of the Covid All-Irelands would suit his relatively young team.

“We’ll go to Dublin on the Sunday, play our match, please God we’ll perform, and then just come home. That’s the way it is.

“We’ll get our takeaway food in Croke Park and come away home, that’s what we did last Saturday in Croke Park, and come back down the road to our families straight away.

“It’s strange, but it’s also humbling. It brings people back to basics, and we’re just glad to have the opportunity to play at all.”

“There’s a lot of gratitude around my camp in particular that we got our games played. Now we’re in an All-Ireland final it’s marvellous but the logistics are quite simple. We’ll be adhering to the guidelines, all of them, and we’ll do whatever is asked of us.”

Remembering his own playing days, he also reflected on the absence of pressures to supply friends and family with tickets in matches behind closed doors.

“I think that’s a help. With big games it’s a real distraction, whether you’re Dublin, going to those games every year, or a county in its first final in a long number of years.

“It is a help, I think, for a player with his mindset and with his performance leading into a match.”