Thousands of fans and a proud mother welcome team home 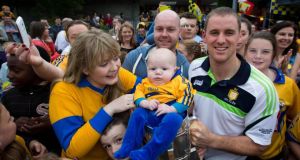 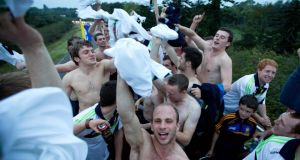 The Clare players celebrate on the bus on their way to Newmarket-on-Fergus on yesterday’s homecoming tour. Photograph: Seán Curtin

It has taken 16 years to bring Liam MacCarthy back to Clare and nearly five hours to transport him the short distance from the Clare border to Ennis for last night’s triumphant homecoming.

Compared to the previous hiatus of 81 years which laid to rest the ghost of Biddy Early, 16 years is like a heartbeat, but All-Irelands are always special when Clare win them and particularly for the people of the county who know how to party better than most.

Away from the stage, O’Donnell’s mother Mary revealed she was one of the last to learn that her her 19-year-old son would be starting.

“We expected to him to play some part but not to start.

“I said, ‘Wow, fabulous’ because I knew he’d be excited about taking part in the parade and the whole lot.”

Did she believe he would score 3-3 in an All-Ireland final? “Not the three points, he doesn’t do points,” she replied.

O’Donnell is not only hurling’s newest heart-throb – with his mop of hair and big smile he could be in a boy band – but hurling’s first social media phenomenon.

He attracted an avalanche of Twitter and Facebook messages from besotted female followers in the immediate aftermath of Saturday’s final.

The good news for them is that O’Donnell is single and his mother will not be beating them away with a camán. “That’s not my job, I’m his mother,” she said, “He doesn’t have a girlfriend, but there are lots of girls he’s friendly with.”

He’s also a young man, acutely aware of those less fortunate than himself, as he alluded to just minutes after the All-Ireland final when he said the win would give a lift to those suffering economic hardship.

His older brother Oisín is working as a civil engineer in Israel where he cried after watching the match in a bar and the picture appeared on social media sites.

“Shane is really sensible. He’s a great lad,” Mary O’Donnell added. “I know I’m going to say that because I’m his mother and all mothers think their kids are brilliant, but he’s really tuned into the real world.”

The victorious Clare senior and under-21 teams made it home last night by back roads. Thousands turned out in the GAA pitch just over the Limerick border in Cratloe, then it was on to manager’s Davy Fitzgerald’s home village of Sixmilebridge, where they were led into the square by a pipe band.

More huge crowds turned out in Newmarket-on-Fergus and Clarecastle before finally arriving in Tim Smythe Park in Ennis just after 8pm, where supporters assembled from early afternoon.

As Christy Moore once sang: “If it is music you want you can come to Clare” and so a wide variety of local acts kept the party going, including James Ball, the brother of Chris Ball, who wrote My Lovely Rose of Clare, the soundtrack to so many Clare triumphs.

As Donnellan said in his victory speech, they could get used to these type of homecomings, given the precociousness of this Clare team.

Munster look to bear brunt of financial crisis; Bayern offer a slice of normality 07:02
Japanese fans can cheer remotely at empty stadiums 06:30
Munster braced for worst of financial crisis due to Thomond Park debt 06:35
Seán Moran: Horan’s cautious approach under growing pressure 06:32
When the action stops, sports photographers think outside the box 06:00
Crossword Get access to over 6,000 interactive crosswords