The sporting decade that was: The greatest hurling final ever

How many games in any sport made you feel the need to claim a state of wonder? 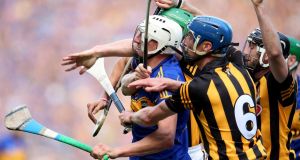 A couple of weeks after Kilkenny and Tipperary produced this epic to end all epics, I got an email from a couple of Danish journalists who had been in town on a junket that weekend. Fáilte Ireland had given them the works, including a day out at the hurling final, and now that they had to write about it, they wanted to know more about the GAA. Was it really true the players weren’t paid? Were they really okay with that? What problems are there in the GAA?

After giving them the answers - yes; yes and no; how long have you got? - I felt it was only right to let them know that they hadn’t just been at any run of the mill match that day. “Not every hurling game is that good,” I told them. “And not all players are able to play that well. The whole country was in a state of wonder for a few days after it.”

Even if reading that back now feels like I might have been over-egging it a touch (Really Mal? The whole country?), it nonetheless makes picking a moment of the decade a terribly simple task. How many games in any sport made you feel the need to claim a state of wonder? Would you get one a year? Five a decade?

In a way, the drawn All-Ireland final of 2014 has been slightly diminished over time by the simple fact of what Kilkenny did to ensure the replay wouldn’t be the same sort of game. But taken on its own merits, it stands above all the other monumental games in a decade that had plenty of them.

Richie Hogan and Seamus Callanan were on another planet. Bonner Maher was the keystone of the Tipp attack, scoring a goal and drawing a penalty. Richie Power chipped in with a wizard-wristed 2-1. On a day when the teams split 4-50 between them, there were still huge defensive displays from Cathal Barrett and Paul Murphy.

Here’s what it was, actually. In the 44th minute, a long strike from Brendan Maher tailed just wide of the Canal End goal. The next time either side struck a wide was when John O’Dwyer’s injury-time free to win it all had to go to Hawkeye. For half an hour of hurling when the stakes were highest and the tension deepest and the punishment for missing was absolute, nobody did.

A few days? You’d be in a state of wonder at it even now.