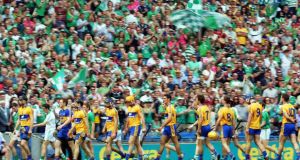 Clare flew in under the radar on this one and produced an outstanding performance. They made hurling look an easy game, certainly far easier than it looked to be for Limerick.

You have to hand it to Davy Fitzgerald. It wasn’t just about his team tactics; it was about the awareness of touch hurling and the awareness of skill on the ball that his men showed in manufacturing a thoroughly deserved win.

These Clare players are very young in terms of age but they’re very experienced and hardened in hurling terms. And where better place to showcase this than on one of the biggest stages – in an All-Ireland semi-final at Croke Park – against their next door neighbours? Clare were the far better team from the word go.

After the excitement of all the other championship matches, and especially after the first semi-final with Cork and Dublin, we expected this one to go down to the wire. It didn’t. It was over early, mainly because the touch of the Clare players was so much better and also because of the mistakes made by Limerick throughout the field. They seemed nervy and on edge and this nervousness manifested itself particularly in poor free-taking and also by the failure to take a number of point-scoring opportunities. When they needed to find a rhythm, those misses only served to hamper them and created panic.

You can’t deny that the missed frees from Declan Hannon militated against Limerick but also destroyed his confidence in general play. He missed three frees and a 65 in that first-half and you’ve got to wonder about the decision not to have Shane Dowling on the pitch. The tactic of leaving him on the bench worked against Tipperary and against Cork but not here. It proved, yet again, as it did in last week’s semi-final and in both of the quarter-finals, how hugely important it is to have a free-taker in the side. Hannon was even tasked with taking – and unfortunately missing – another free after Dowling was introduced.

Yet, we must remember that when Dowling was introduced, he had two fresh airs when taking a sideline cut. It was untypical of him and symptomatic of the edginess that ran throughout the Limerick team.

Better hurlers
Clare were the better hurlers from the word go. You can’t take it away from them. David McInerney was outstanding at full back. He is a colossus for a young man, as good a full back potentially as we’ve ever seen in the game. He wasn’t alone by any means. Goalkeeper Patrick Kelly produced a great save when called on and the half-back line – Pat Donnellan and Patrick O’Connor getting their opening points – was totally dominant. Colm Galvin and Conor Ryan never missed a beat in midfield and the performances of Podge Collins and Tony Kelly in an impressive attacking unit emphasised that Clare were the better hurlers.

Going back to the point about free-taking, in contrast to Hannon, Colin Ryan turned in a masterclass of this art.

Clare played their game and never allowed Limerick to play and it was a done deal long before the full-time whistle. From the start, they had the measure of Limerick. Maybe all the hype that built up in Limerick since their Munster final win worked against them.

They never got going at all. The simple things – like going for the ball with conviction – were missing. One incident in that first half encapsulated their problems: three or four Limerick defenders were in control of the ball but then proceeded to make a series of handpasses before Wayne McNamara went on a solo run, lost the ball and Podge Collins banged it over the bar from 65 metres.

That was just one incident, but there were many others where Limerick players were dispossessed or where they were nervous and the ball fell out of their hands. Their touch was absolutely terrible, and they never got to the pitch of the game.

Both teams played with an extra defender but whereas Clare were calm in possession and looked up and used the ball brilliantly – looking up and hitting it long if they had to hit it long or hitting it short if that was the option – Limerick’s extra defender seemed to get in the way. If they played it long, there was nobody inside. In the second half they were in such trouble they clearly needed goals which never looked like coming their way.

Beforehand, I thought the physicality of Limerick might have worked against Clare. But I was going against my own hurling philosophy in even thinking that really because skilful players should always win out. And these Clare boys have outstanding skill.

In a great hurling year, we’re set for a great final.