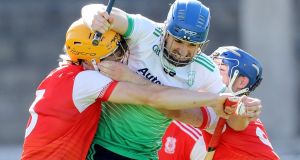 Champions Cuala toiled for quite a while before shaking free from the attentions of a dogged Lucan side, who kept their noses in front until more or less the last 10 minutes.

A goal from Seán Moran in the 49th minute turned around the scoreboard to put Cuala ahead for the first time since the opening seconds. It effectively turned the key on the contest and the champions pulled away comfortably to outscore their opponents by 0-6 to 0-1 in the time remaining.

For most of the first half, Lucan reprised the virtues that had done for Kilmacud Crokes in the quarter-final. They were hard-working and refused to let the champions hit any sort of rhythm and hustled enthusiastically through more rucks than you’d see in an average match at the Aviva.

“Playing with the breeze and five-one down, that wasn’t in the overall game plan but our lads dug in and we sat a bit deeper in the second period into the wind. That’s ultimately the difference in the end.”

Cuala’s defence was under enough pressure, at one stage turning over a score from puck-out, to impact on their presence farther up the field where the two-man full-forward line of Con O’Callaghan and Liam Murphy were finding it hard to get by on a diet of random clearances against tight marking and a well marshalled defence.

This didn’t help when half chances popped up and Cuala’s finishing wasn’t top-drawer. Lucan ‘keeper Cillian Murray was in sharp form when the Dalkey club did manage to conjure chances in the second quarter and he saved well from Moran and Murphy and later from Mark Schutte.

The first quarter had belonged to the challengers, though and they led 0-5 to 0-1 at the water break. Ben Coffey wasn’t in quite the impeccable form of the quarter-final but he contributed a couple of frees with former Dublin All Star Peter Kelly, snapping down a smart ball and shooting a good point, Paul Crummey and Kevin Fitzgerald also scoring.

After the water break Cuala began slowly to rouse themselves and Lucan can’t have been overly happy to go in at half-time just two ahead, 0-7 to 0-5.

Lucan twice stretched the lead to three in the minutes after the restart but the tactical adjustment, referred to by Maher, meant that they were beginning to play their forwards into the game more effectively.

Con O’Callaghan ignited. Taken down by John Bellew, who was yellow-carded, he earned a free which David Treacy converted and two minutes later, nicely found by Seán Brennan’s puck-out, he cut the deficit to a point, 0-8 to 0-9. In the second half, he hit three and got fouled for two more as well as registering an assist for Moran’s goal, the key score of the match.

“Con’s a super player and a super fella,” said his manager. “He has brothers playing, he has cousins playing. It’s his family, his community. And we spoke about that before the game; the importance of hurling to the Cuala community today, not being able to go to matches. We’re just delighted to get the victory for those people.”

Ironically, CJ Smith had just scored a point to push Lucan in front after Diarmuid Ó Floinn – probably the most consistently lively of the winners’ attack – had equalised when Moran drove home the goal that made it 1-11 to 0-12.

With the champions now finding more easily the space that previously had been squeezed and compressed, they were in a position to pick their scores, which Seán Treacy and lively replacements Colm Cronin and Colum Sheanon duly did.

“Championship hurling semi-finals are about winning,” said Maher, “and we came here today to win a semi-final and it was tough at times. That’s the nature of this championship and many others. The Dublin championship is very strong and we’re delighted to get the win.”

The back-to-back All-Ireland winners will be going for a fifth county title in six years when they face Ballyboden the weekend after next.