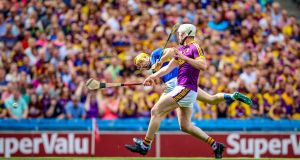 The now almost traditional end-of-July adrenalin boost was completed in Croke Park on Sunday with another All-Ireland hurling semi-final that might have been a health risk had it proceeded to extra time.

In one way it was tactical and modern with David Fitzgerald’s sweeper system building play intelligently from the back and unleashing untracked runners in behind the Tipp defence.

In another sense it was old-school, Wexford plundering goals in homage to the past as a counter to the rapier work of Séamus Callanan, who maintained his goal-a-match standard, Noel McGrath and John O’Dwyer, who had his best match since the team was threatening to declare the season over in May with their incandescent form.

That was the significance for Tipperary. Their roller-coaster championship, having plunged all but underground in the Munster final, hit the upward tracks and climbed to such vertiginous heights that you wonder how they can maintain the trajectory in the final against an also newly airborne Kilkenny.

Wexford’s disappointment was crushing. They tore great holes in the Tipp defence in the first half but ultimately didn’t make enough of the chances created and gifted the impeccable Jason Forde too many needless frees. When handed a one-man advantage on 45 minutes, they appeared certain to drive on into their first final in 23 years – and especially when Lee Chin glided through the opposition defence to stroke the ball into the corner of Brian Hogan’s net for a five-point lead, 2-18 to 1-16.

Gradually though, they began to look more disoriented by the advantage than their opponents, who now played as though they appreciated the tightening urgency of their predicament and proceeded to outscore Wexford by 0-12 to 1-2 in the 20 minutes or so remaining.

Had Liam Sheedy been allowed script this match, he couldn’t have asked for more. His team, widely doubted since Limerick wolfed them down last month and the subsequent lack of response against Laois, showed great stoicism despite dealing with enough adversity to make Job protest.

Three goals disallowed for a variety of reasons, ranging from the straightforward – foul in the build-up (Michael Breen); to the bizarre – a couple of phases of play called back by a belated Hawk-Eye call (John McGrath); to the simply dubious – no advantage played (Jake Morris) on what was initially signalled as a penalty but on mature reflection turned out to be a free, which although easily dispatched was a net loss of two points.

John McGrath picked up a second yellow card in the 45th minute and in what was one of the few – another was Barry Heffernan’s dig at Diarmuid O’Keeffe that went undetected – decisions that swung Tipp’s way, he might have been fortunate to escape a straight red for a petulant flick at Damien Reck’s hand.

Frees went against them and yet they persevered. They were helped by Wexford’s unproductive insistence on opting to go long on the restarts although having a one-man advantage. Tipperary’s backs, having gathered themselves at half-time, tightened in the second half and closed off the rat-runs that had riddled their defence in the first 35 minutes.

The match opened at a furious clip, ball whistling end to end like a game of tennis. Wexford led 0-4 to 0-2 after six minutes: Paudie Foley and Liam Ryan raiding from the back, Rory O’Connor clipping his first and Shaun Murphy, prominent in the counterattacks, getting blocked by Ronan Maher just as he was letting fly and Chin landing the 65.

The response wasn’t long coming. Niall O’Meara hand-passed into the path of Callanan and he pulled on the bounce, past Mark Fanning for a seventh goal in seven matches, 1-2 to 0-4. They had just had one put in the net by Breen disallowed for a foul on Kevin Foley.

Wexford continued to create openings without fully exploiting them but they accumulated points. Murphy’s runs weren’t picked up and Reck was in the clear when Kevin Foley chose to point. With Tipp at sixes and sevens, Murphy and Liam Óg McGovern combined on the left for the former to whip a ball over to Conor McDonald on the far side of the square. He stepped inside and hit his first goal, 1-10 to 1-6.

The second disallowed goal was the most controversial. Hogan looked to have caught Chin’s free over the bar but by the time Hawk-Eye deemed otherwise, John McGrath had apparently scored a goal, which was chalked off and Chin’s score declared valid.

Confusion reigned, the result of the unusually long time lag between the free and the eventually awarded score. Wexford led by two at the break, 1-14 to 1-12.

Scoring initially ebbed and flowed in the third quarter. Tipp got level through Forde and O’Dwyer but having botched a complicated lineball routine, McDonald just hit the ball over to restore the lead.

Trailing by five after Chin’s goal, Tipperary showed their mettle. Playing a captain’s role, Callanan sparked the comeback with the first of an equalising sequence of five unanswered points from Forde, O’Dwyer and replacement Ger Browne. By now the defence had asserted itself and Ronan Maher, exceptional both at the back and venturing forward, and his namesake, Brendan, who won a late, vital free off the indefatigable Chin, stood out.

The winners were further tested by McDonald’s second goal, bundled in after a run by Paul Morris and despite the suspicion of a square infringement but Wexford had been over-elaborating in possession going forward and lost possession more often than they created openings.

A fine contribution from the bench, three scorers, helped Tipperary home and despite their numerical advantage, Wexford just couldn’t make it count.