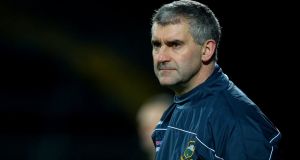 Tipperary manager Liam Sheedy: “These boys certainly seem up for work and they can look forward to the new year and the National League.” Photograph: Oisin Keniry/Inpho

Returning Tipperary hurling manager Liam Sheedy believes his squad have fallen behind in the physical stakes, but he thinks they need an all-round improvement in their standards to be competitive in 2019.

“We feel physically we are little bit behind some of the other teams in terms of our conditioning so we’ve a few tough weeks and months ahead of us,” said Sheedy.

“One thing I would say, and I know it’s early days, but these boys certainly seem up for work and they can look forward to the new year and the National League. Before you know it you’ll be in the beginning of May and it’ll be charged championship time, so we have plenty of work to do in the mean time.

“It’s about building in every position. I’d be happy that in Tipperary we are a proud hurling county and we are looking to really prepare to the best of our ability. Whatever that takes us it will take us but I do think I am happy with the panel that has been assembled.

The early part of 2018 hinted at promise for Tipperary as wins over Waterford, Wexford and Cork saw them finish top of the national league, only to lose the final to Kilkenny. In the Munster championship it was disappointing throughout. A week one defeat to Limerick had Tipp on the back foot, while draws against Cork and Waterford meant their narrow loss against Clare in their final game denied them a spot in the semi-final.

Sheedy thinks it won’t take much for Tipperary to be in contention on a provincial and national stage again.

“I am a firm believer that over the last year or two in Munster it was only a puck of a ball between all the teams. I think that has been played out time and time again. It’s one to look forward to.

“It’s an exciting championship and it does need to be managed. We played for weeks in a row last year and that is not an easy hurdle to jump. We’ll be trying to time our run and make sure that we come ready and come fit.

“Personally I don’t think we were miles off in 2018 and I think it’s close. The nature of the Munster championship is that everything is so tight but that’s the challenge for me and for all the teams. I’m really looking forward to getting to work with this bunch.

“But we won’t be competitive unless we add strength to the panel. That is the challenge for the teams that the latter end of the championship. The panel has to be able to stand the test of time because it is fairly frantic and the ask of every player in every team is significant.

“We have a long injury list at the moment but December is the time to have that rather than the first week in May. With a lot of work to do but we’re really, really looking forward to it.”