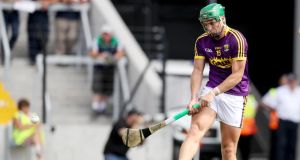 For Naomh Éanna of Gorey, this is a winter they hope will never end. Their first Wexford title came along a fortnight ago and now their first ever foray into the Leinster club championship has a little wind behind it too. They came to Laois and put Camross away with not very much fuss at all. It’s a tribute to their constitutions that they’re able to produce hurling this crisp after two weeks on the tear.

They got their business done early here, running up a total of 3-10 in the first half to go eight points up at the break and essentially coasted to the final whistle from there. Camross had a late flurry near the end to take the bad look off the scoreline but they were never close enough in the second half to jangle anyone’s nerves on the Wexford side. Life will be tougher when Naomh Éanna face off against Ballyhale next day out but they’re thrilled by the very prospect of it.

“Next weekend will be our first weekend off in 16 weeks between hurling and football,” said Naomh Éanna selector Willie Cleary afterwards. “So it’s a relentless journey. I have to laugh at the county managers, and I agree with them that four weeks in a row is draining and it’s tough, but you’ve got to embrace it. Why wouldn’t you?

“You have to embrace this and look forward to days like this and relish every day that comes. You’re in there with 30 of your best friends going out to play for your club colours, why wouldn’t you want to do that every Sunday? What would you want to do, sit at home and be out of the championship? It’s November, bring it on, bring on Ballyhale in two weeks. We’ll look forward to whatever challenge comes our way.”

The Wexford champions were sparkling here, in the first half especially. At times, the Camross defence looked like they were trying to catch butterflies with a hula-hoop. The movement in the Naomh Éanna attack was constant, with Conor McDonald the sun at full forward and the rest of the forwards orbiting him, living off his heat.

Corner forward David O’Brien spent his afternoon flitting around left and right and stealing into little pockets of space here and there. The Camross backline passed him on with plenty of pointing and talking but nobody ever really came to grips with him. He was everyone’s responsibility so he was no one’s responsibility. By half-time, he had 2-2 against his name.

O’Brien was only playing because their county forward Cathal Dunbar was out suspended. He’ll be hard to keep out of the 15 against Ballyhale after this. It’s one thing finding the space, it’s another doing the right thing with it. After McDonald set him up for his first goal on 12 minutes with a glorious pick-up in a tight spot, his flick to beat Thomas Dunphy in the Camross goal was straightforward enough.

Not so his second, however, 11 minutes later. Again he tiptoed in behind the Camross defence, hanging out on the edge of the play waiting for it to develop his way. When centre forward Pádraig Doyle spotted him, his stick pass was a little underhit, causing O’Brien to have to show a velcro touch to bring the ball up into his hand. His finish was instant and it pushed Naomh Éanna into 2-4 to 1-6 lead. They were never behind again for the rest of the afternoon.

The air went out of the Camross challenge fairly quickly after that. They had actually begun the game as the better side, bucking out to a 0-5 to 0-1 lead after eight minutes. Zane Keenan was faultless on the frees early on and Mark Dowling and Niall Holmes chipped in with a pretty score apiece.

But as McDonald’s influence mushroomed at one end, none of the Camross forwards could get anything like the same purchase at the other. Keenan pinged a brilliant free to the net after 15 minutes but in general play he was well handled by the Naomh Éanna defence.

By contrast, McDonald was rampant. The Wexford side were able to isolate him one-on-one with Malvin Moloney and when he got ball in hand, damage invariably followed. In the space of three minutes near the end of the first half, he put up a point of his own, got fouled for a Doyle free and then knifed the best goal of the day – a 20-yard pearler into the roof of the net. That put the seven ahead and from there onward, all doubt was wiped from the day.

So Ballyhale next, Henry Shefflin and the rest . . .

“Well Shefflin’s on the sideline!” smiled Cleary. “TJ Reid, Michael Fennelly, Colin Fennelly, and the one thing that’s impressive about Ballyhale, and it’s probably not been noted, is their younger lads coming through. The Eoin Codys, the Evan Shefflins, all around the field, and they’re after slotting in seamlessly. While Henry has gone himself, these lads have come in and it’s like it’s given new life to them.

“In the first 20 minutes against Bennettsbridge in the Kilkenny final they were just untouchable, you’d wonder if any club would go near them. They’ve just household names all over the field. But isn’t it great for us on our maiden voyage to get Ballyhale in Wexford Park? And, as I said, try to do the people of Gorey and the people of Wexford proud? Sure it’s fantastic.”