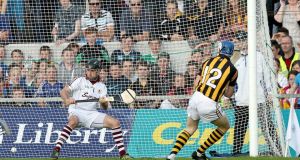 Kilkenny restored order to their season having made all the right changes before this evening’s GAA Leinster hurling semi-final replay in O’Connor Park, Tullamore. In the end it was the dismally familiar story for Galway who – unable to summon another miraculous scoring harvest such as had kept them afloat in the drawn match – ended up well beaten.

Brian Cody unusually named his team just before the throw-in. It showed five changes from the side that drew six days previously but there was no sign of the hoped-for return of Michael Fennelly whose back injury had evidently failed to heal.

Jackie Tyrrell constructively proved the folly of playing him at centre back with a barnstorming display in the customary environs of corner back whereas Brian Hogan emphasised the point with a solid showing at centre back.

The more surprising move of putting Conor Fogarty at centrefield also proved a success and his hard work played a significant role in disrupting any platform Galway might have wanted to build.

From a Galway perspective their three changes did not have anything like the same effect. Confronted by a more coherent defence, Jonathon Glynn was unable to cause as much trouble under dropping ball and both of the other newcomers, Paul Killeen and Joseph Cooney, were replaced before the end.

Most damaging for Anthony Cuningham’s side was that captain Joe Canning, after a monumental display in the drawn match, struggled to get into the match, shuffling from position to position and only managing one point – from a line ball.

His one shot at emulating the previous week’s heroics was a free a little too far out to pose serious menace and it flew through the crowded goalmouth and went wide.

An explosive opening saw two goals in the space of the first five minutes. After TJ Reid and David Burke had swapped points Kilkenny drew the first real blood when Pádraig Walsh played Reid in on goal and the in-form Ballyhale forward crashed the ball into the net in the fourth minute for what was to be his only score from play in the first half.

He did however convert nine frees – a staggering total for 35 minutes but fair reflection on the amount of fouling forced on the Galway backs by Kilkenny’s lively re-jigged attack.

Within a minute Galway had bounced back. Canning fed Andy Smith in space and he drove forward and got off a shot, which Eoin Murphy saved only for Jason Flynn to react and bat the ball into the net.

Of even greater concern to Kilkenny was that Murphy picked up an injury and minutes later had to be replaced by David Herity.

Suddenly Galway took the initiative and three points – Conor Cooney’s free, a great break, solo and strike from his own 45 by Iarla Tannian and another score from Flynn – gave them a clear margin on the scoreboard.

Once again however Kilkenny clicked into a rhythm and reeled off six points, mostly Reid’s frees but added to by points from Pádraig Walsh and Richie Hogan.

An encouraging Galway revival got the margin down to two, 1-9 to 1-11, at the break and that constituted good business after a half in which they’d been under a great deal of pressure.

Kilkenny though started the second half in the manner Galway needed to with four unanswered points from another Reid free, a brace from Aidan Fogarty and another from Tommy Walsh, starting with his brother Pádraig in the half forwards.

Galway rallied with three points, two from Conor Cooney and Canning’s line ball but they were finding attacking positions too hard to establish as Kilkenny’s defence pushed up on them and – Tyrrell in particular – broke up play and cleared ball.

The match was effectively put to bed in the 52nd minute. Colm Callanan saved well from Pádraig Walsh but Aidan Fogarty managed to steer the cleared ball back into the net after the danger had looked to have been averted.

Points were swapped but any lingering Galway hopes of being able again to shoot their way to safety were dashed when Kilkenny finished with a flourish and 1-1 in injury-time. Reid looked to have taken a lot out of the ball on the way to his second goal but Eoin Larkin added a point and no-one could argue with the emphatic result.