Having perhaps braced themselves for the worst, in the light of Galway’s improved form, Kilkenny eventually worked out that any such fears were misplaced and in the end tucked away the county’s 70th Leinster hurling title without too much fuss at Croke Park.

Better score-taking and the usual ability to remedy difficulties quickly were the basis of the victory, which catapults Brian Cody’s side into a 16th All-Ireland semi-final in 17 years.

Against the backdrop of having to absorb a litany of retirements, the All-Ireland champions underlined that they remain a functional force in the game with the new generation continuing to deliver high-quality displays.

Once again TJ Reid and Richie Hogan were to the fore – Reid scoring 1-3 from play and making three assists and Hogan re-configuring his role from centre forward to defensive centrefield to enormous effect – but Paul Murphy and especially the ubiquitous Cillian Buckley, a magnet for the ball, were also excellent in defence.

Galway’s sweeping movement into the full forwards, the most impressive aspect of their best displays, never materialised and although the team’s defence grappled manfully with the task, they couldn’t tear enough gaps in Kilkenny’s rearguard to rack up a big score.

The worst of the day’s deluges had passed by the time the match started but it was a disappointing final. Yet again Galway promised more than they delivered and in the six meetings since they joined the Leinster championship, the 2012 final remains their only victory over Kilkenny.

They were below par in this contest, poor control and touch and inaccurate use of possession undermining their efforts to get a real foothold. 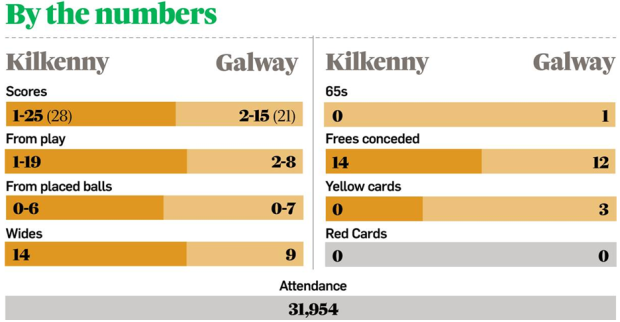 They did well to keep it competitive for most of the first three quarters but there was never the blitz offensives and big leads on the scoreboard that characterise a big performance.

They out-scored the champions in goals but every time they appeared to be on the verge of exerting serious pressure, Kilkenny tipped the pedal and moved clear once more.

The most obvious contrast was in the ease of scoring. Only two of Galway’s forwards scored more than once from play, whereas five of Kilkenny’s starting attack managed to do so.

When it was briefly put up to them at the start of the second half – Jason Flynn racing onto a ball broken by Joe Canning and sticking it in the net to equalise the match – Kilkenny took on Galway in a burst of tit-for-tat scoring with five points in three minutes.

It was the challengers who blinked first in that sequence when Cyril Donnellan sent an intended equaliser wide of the Canal goal and soon Ger Aylward, confirming the good impression he’d made in the semi-final with three points, had widened the margin.

The last throw of the dice for Galway came in an assault on goal in the 48th minute. Unusually they quarried ball out of two successive scrums and Jonathon Glynn barrelled his way in on goal and flicked the ball to David Burke, who took it on his stick and drove a shot narrowly wide of the goal. It would have given Galway a two-point lead.

In the first half the scores had fluctuated in small increments and the sides were level four times before Kilkenny began to pull away.

The margin reached four, 0-10 to 0-6, when they struck for goal. Aylward’s ball across goal was intercepted by Daithi Burke but he could only parry it into the path of Reid, who made the space to slip in the goal that threatened to derail the contest completely.

It set a pattern for the match. Galway doing enough to stay within range but not enough to threaten the outcome. By the final quarter Kilkenny’s tightened defence – Jackie Tyrrell was called ashore just after the near-miss from Burke’s shot – always looked equal to the challenge, whereas at the other end they fluently sniped points – Eoin Larkin finishing with four.

Kilkenny now wait for five weeks before rejoining the fray against whoever emerges from the quarter-finals and at the moment it’s hard to identify a likely contender at this stage.

Galway head for the quarter-finals, a stage at which they haven’t prospered for a long time but in the knowledge that they have shown sufficient improvement to target a return to Croke Park in August.

Ian O’Riordan: Think you understand the fellowship of the rider? Think again

Johnny Watterson on an unequal Olympics; McEnaney to learn his fate

5 France expose gulf in class with impressive rout of Ireland

Stewart Cink leads by five at RBC Heritage as Lowry slips back 10:17
Leona Maguire’s good form continues with tie for second in Hawaii 10:01
Shamrock Rovers snatch victory against Longford to go top 07:00
Darren Clarke enjoying Bahamas life but passion for golf still burns bright 07:00
How the GAA wove its way through the black summer of 1981 07:00
Crossword Get access to over 6,000 interactive crosswords

Ian O’Riordan: Think you understand the fellowship of the rider? Think again

Michael Walker: Where are the plaudits for Zinedine Zidane’s coaching career?

Johnny Watterson: Can we really justify an unequal Olympics going ahead?