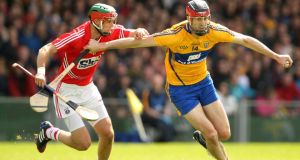 Clare’s Darach Honan holds off Stephen McDonnell of Cork during the Munster SHC semi-final, a game where the Clare forward threatened to rule the roost. Photograph: Cathal Noonan/Inpho

The same old clichés keep recurring: hurling-wise, it’s been a fantastic championship, reminiscent of 1995, and weather-wise it hasn’t been too bad either. It has been virtually impossible all along to know who could win any given championship game. Now, here we are at the All-Ireland final, and – intriguingly – that still holds true. It’s going to be tight and close and exciting and, at the risk of repeating myself, it’s another tough one to call.

I’ve seen Cork and Clare play twice this year, the relegation final and the semi-final of the Munster championship. That first game went to extra-time and Clare won it shooting an unbelievable amount of wides. In Limerick the second day, Cork won but Clare certainly had their chances. Darach Honan looked early on like he was going to rule the roost. But Clare missed a number of goal chances early on that would have won the game and Cork came through.

It would have taken a brave man in the Gaelic Grounds in Limerick that day to say that Cork and Clare would be playing in an All-Ireland final. You’d have been laughed at. And, yet, here we are; and, in fairness, both teams deserve to have made it all the way to this final showdown of what has been a memorable hurling championship.

Underdogs winning
Against the background of what has happened throughout the summer, with unpredictable results and underdogs winning, it is still hard to know who the winner will be here. It’s an All-Ireland final with a lot of new, young players and both managements will need to manage the pressures that come with this biggest of all hurling stages. It’s only very recently that we saw Limerick effectively failing to turn up in the semi-final.

I’m pretty sure both teams will turn up for this one and, if they do, it will be tight. Nothing can be taken for granted on that count however, given the number of newbies and young players in the teams.

Against that, Brian Murphy’s return to the Cork team brings back medals that Tom Kenny took off the team and there are multiple All-Ireland winners in selectorial roles and most pertinently Jimmy Barry-Murphy who has done it all before. The experience on the Cork sideline is massive.

It’s worth mentioning that, on the other side, Davy Fitzgerald’s experience with Waterford in the 2008 final will be telling as well. He realises that’s one where the build-up got on top of them, that the hype affected them before the game and they didn’t turn up and perform. He has learned from that and Clare have had a much more low-key build-up.

This 2013 championship has been ultra-exciting, one of the best in memory. We’ve been getting really tight games and one of the reasons is the championship hasn’t been producing many goals, for one. And the games have been about keeping possession and using the ball in space in front of attackers as opposed to lumping it long. It’s not a coincidence that the two best teams of 2013 are in the final.

Much of the talk in advance of the match is about tactics. The expectation is that Clare will again use the sweeper. They’ve used Pat Donnellan in that role twice, against Galway and Limerick, but slightly differently in each case: he sat in front of Joe Canning the first time and had more freedom in the other game. You have to say that, in both cases, Galway and Limerick dealt very badly with it. They both had plenty of possession but used it poorly. For me, matches are never so much about tactics as about the fundamentals of going to the ball, getting good touch and using the ball well.

I haven’t seen a team win an All-Ireland with a sweeper yet!

Scoring pattern
In the last couple of games, Cork’s use of ball out of defence with Conor O’Sullivan as the extra man has been extremely good. They’re not a team that lumps the ball in and go for goals. Actually, their scoring pattern is very similar to that of Clare. So, I’m not sure the sweeper could work as well against Cork as if did against Limerick or Galway for Clare. And remember Limerick’s selection trick didn’t work the third time either.

However, if Clare were to go 15 men on 15 it might throw Cork. In their Munster championship game, Clare set up with an orthodox line-up and could have scored four goals in the first 15 minutes of that match. They have the players to do that. What Clare don’t want is for Honan and Conor McGrath to be totally isolated and to be chasing shadows.

Rather than tactics, I think the winning of the game will be done to the fundamentals of hurling in the middle third, where quick touch in traffic and the ability to ride tackles and move the ball judiciously will be necessary. That’s where Tony Kelly and Colm Galvin for Clare and Daniel Kearney and Lorcan McLoughlin for Cork have been doing really well and whoever gets to grips there and gets on the ball will give their team a decided edge. Not how they initially line up tactically, but how they adjust during the game.

Both teams have snappy forwards capable of scoring – Conor Lehane and Luke O’Farrell improved for Cork the last day against Dublin but they’re capable of further improvement and with Patrick Horgan on song they seem the more likely to get goals.

Pressure
There are a few key things to the winning of this game. How they go to the ball. How they use it. How their freetakers hold up in an All-Ireland Final. Up to now, the respective freetakers here have been outstanding. In a year where freetakers not doing their stuff has cost all the teams that were beaten, these teams seem to have the best in the business. Will they hold up under the pressure of it all?

I think it will be close, very close. But I also have a sneaking feeling Cork have the ability to shift up another gear.

A potential All-Ireland title wouldn’t have been on Cork’s radar at the start of the championship but now there will be a great belief in Cork that they can win, that this is one from nowhere they can sneak. They’ll have massive support and, unlike Limerick’s support in the semi-final which got nervous, Cork’s support is full of belief in itself and I think this will be an advantage.

This belief can bring the necessary improvement in Cork and get them over the line to get the Liam MacCarthy back to Leeside.