Gort have edge over Portumna in Galway final 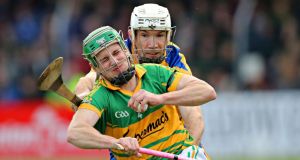 Gort’s Michael Cummins is tackled by Niall Hayes of Portumna in the Galway SHC final at Athenry. Photograph: Cathall Noonan/Inpho.

Gort claimed their seventh Galway senior title and defeated reigning county and All-Ireland champions Portumna in Athenry. It was their first title since 2011 and it took late goals from Wayne Walsh and Albert Mullins to kill of the Portumna challenge as Kevin Hayes brought the holders level when he rattled the net with time running out.

“What a fantastic game, not a bad belt, no stoppages, nothing. What a team Portumna are, they threw everything at us today,” said man of the match Aidan Harte. “We are the younger team and we thought we would be fresher in the end, and I suppose it did prove that way.”

In a timid first half, Gort played with a stiff breeze at their backs and led 0-9 to 0-5 at the interval.

Gort wouldn’t fall behind again and when captain Greg Lally grabbed his second point from distance in the 16th minute they went 0-4 to 0-3 ahead.

They were in the ascendency for remainder of the half as Gerry Quinn was accurate from the placed ball – he hit three from three in the first-half.

He had his own personal battle with Joe Canning in the scoring stakes and when Canning went for goal from a 20-metre free it could have levelled the game, but Gavin Lally pulled off a great save.

Damien Hayes hit back-to-back points after that and with just 11 minutes left, Joe Canning’s free brought the deficit back to the minimum.

Two Quinn frees eased the pressure on Gort but then the late drama ensued as the rain began to fall and Ollie Canning’s wonderful handpass put Kevin Hayes in for a sweet Portumna goal which levelled the game.

With the breeze behind them they went for the kill but were caught out at the back.

Walsh, who was only on the field 10 minutes, took advantage of a goalmouth scramble to fire home Gort’s first goal.

Then with four minutes of injury-time signalled Portumna searched in vain for a reprieve – Quinn passed to Albert Mullins and he made no mistake to seal victory.

“When they got the goal it looked like it was curtains for us, we were into a nice breeze and it looked like we were going to be in trouble, but we replied immediately with a goal and we finished it off then,” said Gort selector Mattie Murphy.

“You have no idea what this means to the people of Gort. We got a hiding in 2008 when Portumna were at the peak of their powers. We were gossoons growing up and we came of age there today. It means an awful lot to us.”

Without doubt, Portumna’s long lay-off of nine weeks without a game due to a delay on the opposite side of the draw meant they were far from their best. Manager Michael Monaghan refused to lay full blame for their defeat at their inactivity.

“It was nine weeks today since we played, it took its toll. Before the game we didn’t know our form, we didn’t know how we were going. It’s no fault of our lads, but it’s hard on them. But the better team won on the day, they adapted better to the conditions,” said Monaghan.