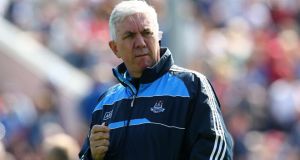 Dublin manager Ger Cunningham saw his side lose out on two scorable frees due to new advantage rule in their one-point Allianz Hurling League semi-final against Cork. Photograph: Cathal Noonan/Inpho

Dublin manager Ger Cunningham was in an awkward position. His team had sustained an agonising, one-point defeat at the end of a match they appeared to have won for most of the afternoon.

They had hit wides but they had also lost two frees – of the “gimme” variety given Paul Ryan’s form on the day – to the new advantage rule, as the fouled players, David O’Callaghan and Mark Schutte, played on to no avail until referee James Owens’s licence had expired.

Asked had he felt that Schutte had been fouled, Cunningham sighed at the temptation.

“I’ve got to be careful because with the new rules, you can’t say much because there’s obviously a danger of repercussions if you do. I better say nothing.”

He was enticed into improving on that position a little.

“It was a definite free. But there was [sic] other frees. This advantage rule, obviously it was the first time really we had a chance to look at it today.

“A player doesn’t know that he has advantage if the referee is behind him with his hand up, and that kind of stuff. So again, there were a couple of opportunities certainly . . . unless you stop now or just take the ball down and get the advantage, but you don’t know that you have the free.”

“Hard to know, it’s the first time we’ve had a chance to see it in a really competitive game and see how it works. It’s in; we’ve to learn to live with it and work with it and see how we can take advantage of it.”

“I don’t like doing it too often,” he said as if suspecting such resurrections were strictly rationed among teams.

“I mean we didn’t do it against Tipperary at Croke Park last year. You can’t be giving yourselves big leads to peg back like that.

“It’s a league semi-final at the end of the day and the lads are just thrilled to get over this one and get to a league final. That’s vital. We are not playing Championship until June 7th and we are thrilled about that, to get to the final.

“You know, Dublin were a very, very good team today, a serious team and we are thrilled to just get over them.

“Some of their scoring from out the field was absolutely brilliant, their ability to win the ball in the air was way better than us at times.

At the time Waterford and Tipperary were playing outside and the Cork manager had to be mindful of the outcome, which would eventually emerge: that Championship opponents Waterford would contest the league final with them five weeks in advance of the provincial date.