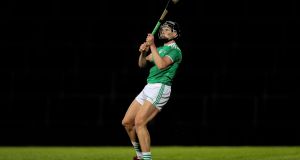 There are two approaches to marking Limerick’s form player Gearóid Hegarty, and neither have worked so far this championship.

Hegarty is Limerick’s top scorer from play in 2020 with 3-15 in six matches. Within that his seven points are the most any of Limerick's 13 scorers from play have so far managed in the 2020 championship. He’s also assisted 1-6.

A 6ft5in, 15st 2lbs former Limerick footballer, playing for a coach and manager who did likewise, Hegarty’s role is not all that dissimilar to a Gaelic football midfielder. He drops from number 10, causing havoc, drifting around the middle third linking Limerick’s transition from defence to attack; sometimes retaining possession, but often setting up scores and taking them too.

In the meantime he constantly grafts and contests restarts. The question for the half back designated with marking him is, whether to follow or to hold your position at wing back?

So, for more than one third of his possessions, the biggest man on the field is exchanging the small ball via hand passes. It's almost not fair.

If neither approach tried so far has worked, what hope do Waterford have this weekend?

Against Clare the St Patrick’s club man enjoyed an impressive 26 possessions as the opposing half backs held their positions. Covering their full back line against Limerick’s diagonal long ball threat and overlapping runners through the centre. However, the pressure from their forwards and midfield was way off what was required for this approach to be successful.

Hegarty, in the form of his life, added five assists to his five points (he was fouled for 0-3 and gave the final pass for 0-2) but it’s his role in Limerick’s interplay that was most significant. Spending most of his time at midfield or in his own half, Hegarty gave 10 short passes, four of them with his hand, after receiving 16 short passes, seven of them with the hand.

Strength in numbers, the sheer size and quality of personnel and a commitment to the simple pass allows Limerick to control possession in the middle third and dictate the pace of the game. By bunching the areas they need to, and freeing up the spaces they want to, John Kiely's team set the terms.

With Hegarty to the fore that’s exactly what happened against Clare. Limerick players coming out of their half had enough time to pick out Aaron Gillane and his fellow inside forwards with accurate passes, and enough quality to score from distance. Or to work it through the runners for a higher percentage shot. It’s a game plan, influenced by the transitions and game management of football tactics, that came into full effect in the second half.

Against Tipperary then, the reigning All-Ireland champions decided to follow Hegarty as he roved. The aim was to unsettle Limerick’s transition out of defence, without having to sacrifice their own forwards to the battle in the middle third.

First Barry Heffernan, and then Pádraic Maher picked up Hegarty. The 26-year-old drifted free for two early scores but was limited to 12 possessions. Still excellent in attack, he was fouled for Gillane’s penalty and assisted a further point.

His possessions included five short passes, one with his foot. While he received five short passes, three from hand passes. But his role in the team's interplay was reduced – as he was free less often – and could have been further so if the pressure on the Limerick halfbacks was greater. And if the half forwards were marked tighter and more tenaciously.

But in forcing Tipp defenders into the middle after him, he freed up space for the inside line who took advantage. Limerick scored three goals and Hegarty had another disallowed for a throw ball after galloping through on the overlap. The price Tipperary paid for this approach was goal chances. A hefty fee.

Now then, if neither approach tried so far has worked, what hope do Waterford have this weekend?

Well, Kilkenny set a pretty good template in last year’s All-Ireland semi-final win. But while they did get their tactics right, their attitude proved the decisive factor.

Kilkenny, like Clare, kept their backs in position. But they targeted the Limerick half back line. Flooding that area with forwards, tackling like flies and winning aerial contests like giants. Limerick’s half backs were flustered and often outnumbered in areas they normally have a numerical advantage in. Simple passes went astray, and the wrong option was regularly taken.

First Hegarty retreated, digging in to help win the ball, as Limerick's shape quickly dissolved. Then, he pushed on to provide a direct outball. But when they did go long, the Limerick forwards who stayed up top were surrounded by the Kilkenny defenders who had held their positions throughout.

Yet still, Limerick missed a late goal chance, were denied a 65 to equalise with the last puck of the game by a poor officiating decision, hit 15 wides and missed 50 per cent of their scoring opportunities. Their gameplan still provided them with more than enough chances to win. But, that’s what can happen when savage pressure is applied.

That day Hegarty was taken off within the hour. It took 26 minutes for him to get the ball in his hand, he had nine possessions in all, with one missed shot, and two assists. Not his best day then but with the half back line in trouble he struggled to get into the game without a regular supply of short passes.

So can the Déise match Kilkenny’s intensity, with similar tactics to those Clare deployed? Or will they follow a more man on man approach, like Tipperary did? Just executed with manic aggression and better match-ups.

Limerick’s combined scoring total in their wins over Clare and Tipperary was 3-59, their average winning margin rounds up to 10 points. Their half forward line has been one of the pillars of their success in recent years, and Hegarty is their form player. As such, Waterford must reduce his impact and that of his half forward colleagues.

Tactics alone won't do it, but combined with the necessary pressure, the link man can be cut out.