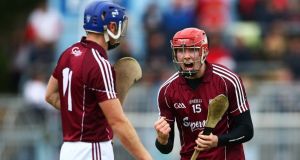 Galway’s Cathal Mannion has enjoyed an impressive championship campaign to date, scoring a total of 3-15 from play. Photograph: Cathal Noonan/Inpho

Can Galway rely on 10 minutes of excellence to beat Tipperary or Kilkenny? No.

The Tribesmen have shown in flashes of dexterous free-scoring brilliance this summer that they have a team well capable of mounting a real challenge for Liam McCarthy. However, almost 40 per cent of their total scores to date have come via a 10-minute period in each of their five championship games.

In their 50 most productive minutes throughout those five games, Anthony Cunningham’s team have managed 54 points (8-30). That’s a point per minute ratio of 1.08.

So during periods which equate to 13 percent of their championship game time, Galway have put away 40 per cent of their overall total.

Minus their 2-3 between the 30th and 40th minute in the Leinster final against Kilkenny, Galway scored just 0-12 in an hour. That’s 43 per cent of their scores in one 10-minute blitz. 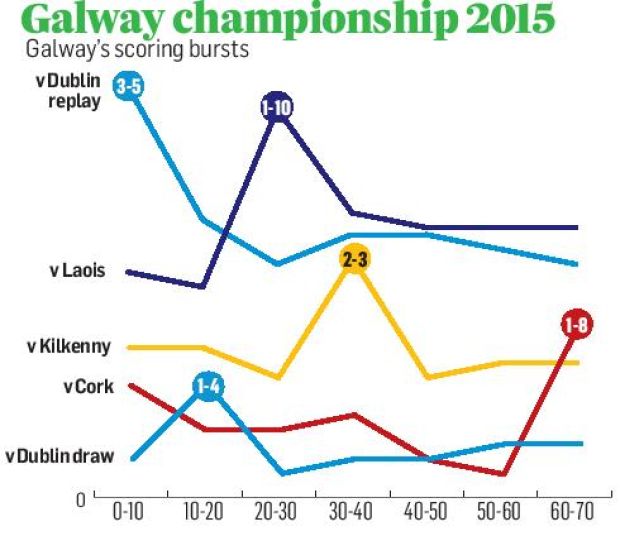 Tallies of 5-19 against Dublin and 2-28 against Cork were amassed – but it didn’t happen against Kilkenny. And it won’t happen against either Tipperary (or the Cats again if they make the final) if they continue to rely on this binge scoring to win games for them.

In the five combined 10 minutes prior to Galway’s high-scoring sprees they have amassed just 0-5, summing up the huge diversity in their displays. Casual, lethargic to utterly brilliant.

Of course every team has a purple patch, Kilkenny for instance have been peaking in the final half an hour of games, but the top, top teams simply don’t switch of like Galway have been.

In the replay against Dublin they won by 13 points yet scored more, 3-5, than that diference in just one 10-minute spell at the start of the game. In fact their overall winning margin in those five games (45 points) is 0-9 less than the combined total of the highest scoring 10-minute period in each game.

Tipperary, like Kilkenny, are far more consistent opponents. Their highest scoring 10-minute period so far this summer was just 0-2 more than the next highest, and just 0-5 more than the lowest in that particular game. Against Waterford in the Munster final, they scored 0-4 in three of the 10 minutes sectors, 0-3 in another two, 0-2 in one and 0-1 in the other.

Galway have plenty of scorers, it’s just about finding that consistency over 70 minutes. Aside from his frees, Joe Canning has 4-10 so far this summer – average of 0-4 a game. Cathal Mannion has more with 3-15. The six forwards who started against Cork have 10-46 between them from play this summer. In 15 games in 2015; Walsh Cup, league and championship they’ve had seven different top scorers from play in a game.

So, far from a one-man team – but all the forwards in the world won’t win you an All-Ireland when they are all only showing their true colours for 10 minutes spells in games.