Fine margins as Tipperary do just about enough 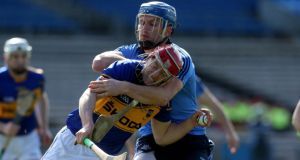 Tipp’s Michael Cahill is halted in his tracks by Dublin’s Conal Keaney during the league clash at Semple Stadium. Photo: Donall Farmer/Inpho

The ball hopped around the roulette wheel before finally stopping with Tipperary heading for an Allianz League quarter-final against ancient rivals Cork and Dublin dusting themselves for for a relegation play-off against Waterford.

A lively encounter in the cold sunshine of Semple Stadium before a modest crowd of 4,768 culminated in an injury-time point for Tipp from replacement Ronan Maher.

This pushed his team into the three-point lead required to draw level on points with Dublin in Division One A and move ahead of the Leinster champions with an identical points difference but superior scoring total over five matches.

The drama didn’t quite end there, as Dublin had a further chance but Niall McMorrow curiously appeared to drop the ball in on the square instead of attempting the point that would have reversed the final placings.

Waved wide
That would in all likelihood have led to controversy, as Tipp corner forward Jason Forde had seen a perfectly good point, from a sideline cut, waved wide in the 39th minute.

Intensifying Dublin’s frustration must be the scale of their superiority in the early stages of the match. Alan McCrabbe lined out at centre forward and wrought havoc, slipping free into space and acting as a link man for the defence as well as nailing all of his frees and a couple more from play.

Anthony Daly opened with a two-man full-forward line of David O’Callaghan and Danny Sutcliffe with Colm Cronin dropped back around centrefield. Despite Tipperary retaining all three defenders in the full backs, they were under pressure and Dublin also had the better of it in the half forwards where Conal Keaney and Ryan O’Dwyer supported McCrabbe.

Dublin were more forceful, smarter in possession and won nearly all of the rucking and tussling for ball.

Tipperary still managed to organise a few raids and their main forward threat Séamus Callanan chipped in a couple of frees to go with a counter-attacking point from Michael Cahill to keep them on the scoreboard.

None the less at 0-9 to 0-3 in the 21st minute Dublin were well in control and Daly was afterwards all too aware that they had needed to press on rather than, as happened, lose the initiative.

Simple point
A looseness entered their play. Ryan O’Dwyer tried to take on the ball when a simple point would have sufficed.

A couple of unforced turnovers of possession were translated into points, as Tipperary outscored Dublin by six to one in the quarter of an hour before the break by which stage the lead had shrunk to the minimum, 0-10 to 0-9.

By now McCrabbe’s early impact had waned a little and Sutcliffe had moved off the square but Dublin opened strongly after the break with a free from McCrabbe and points from Sutcliffe and O’Dwyer.

Arguably the most influential score of the match was the goal that hauled Tipp back into contention in the 42nd minute. Callanan’s solo through the Dublin defence climaxed in a shot which again Maguire did well to block. Patrick Maher’s follow-up was also stopped by the goalkeeper but finally the Tipp man managed to force the ball over the line.

The score revived Eamon O’Shea’s team and, as he said afterwards, they came to terms better with Dublin’s configuration and Brendan Maher, Kieran Bergin and Noel McGrath strengthened the effort through the middle.

Sniped scores
A string of scores in the 10 minutes or so after the goal saw Tipperary outscore their opponents by 0-6 to 0-2 and open up the first of the three-point leads. Noel McGrath erupted with three points in six minutes and, as Dublin continued to turn over ball, Tipp sniped scores from him, Callanan and John O’Dwyer.

The match hovered on the critical margin for the entire final quarter but Dublin three times pulled it back to two through a long-distance free from Joey Boland, a point from a good supporting run by Sutcliffe and a McCrabbe free, the last of which came in injury-time and appeared to have done the trick until Ronan Maher got a clear run down the middle for the decisive point.

Dublin will need to be careful not to repeat the relegation disappointment of two years ago if they are not to slip back into the alternating season syndrome.

Tipperary on the other hand have weathered a lot of criticism in the past couple of weeks and if this display at times lacked conviction, they at least are still going, into a quarter-final clash with Cork, as the clock is about to go forward.