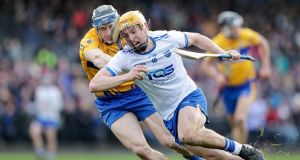 Clare claimed a one-point victory over Waterford in front of a crowd of 3,000 at Fraher Field on Sunday to set up a meeting with Tipperary in next Sunday’s Munster senior hurling league final.

In truth Clare were much the better side for the vast majority of the game, with Waterford hitting two injury-time goals to put a much better look on the scoreboard.

The visitors looked far sharper and fitter than their hosts in an opening half and hit 1-13 of their total from play. Newcomer Diarmuid Ryan ran amok at half forward, hitting five first-half points. Conor Cleary and Aidan McCarthy were outstanding in the half-back line with Clare’s precision passing and possession game leaving their opponents frequently chasing shadows.

The Banner led 0-11 to 0-2 at the end of the first quarter and threatened to overrun Waterford at that stage. Former hurler of the year Tony Kelly netted after 26 minutes when an Aaron Shanagher effort was partially blocked with Kelly beating goalkeeper Billy Nolan to the loose ball before shooting into an empty net.

Clare’s Donal Tuohy, a late replacement for Keith Hogan, kept the standard of goalkeeping at the very highest with an excellent save from Tommy Ryan after 29 minutes, while his pin-point puck-outs were the launch pad for many of Clare’s best attacks.

Stephen Bennett, the only scorer for Waterford in the opening half, rounded his marker to drive high to the net to give his side encouragement after 33 minutes and reduce to the margin to 1-14 to 1-5 at the break.

Kelly and the 2017 hurler of the year Austin Gleeson were involved in a melee just before the break which earned them both a yellow card from referee Kevin Jordan.

Páraic Fanning introduced the experienced Kevin Moran at the interval and it helped the home side’s cause immeasurably. Waterford managed to reduce the margin to just four points, 1-18 to 1-14, by the 58th minute with Stephen Bennett again leading the charge, scoring from play and placed ball.

The home side were dealt a major blow just as they were getting into the tie when substitute Podge Collins found Colin Guilfoyle unmarked on the edge of the small square to shoot home Clare’s second goal and push the lead back out to seven points after 59 minutes, 2-18 to 1-14.

Clare were in control of proceedings heading to full-time before late injury-time goals from Tommy Ryan and Stephen Bennett from a 20-metre free left the Banner somewhat hanging on and pleased to hear the final whistle.