Decision comes after ‘divided opinions expressed by players’ on change 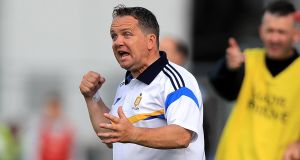 Davy Fitzgerald has confirmed that he is to step down as Clare senior hurling manager after four years in the post.

Speculation had mounted in recent days after a number of senior players were not happy with Fitzgerald staying on in the senior manager.

Fitzgerald, who has been on holiday in the United States, released a statement through the Clare Senior Hurling Management on Wednesday evening.

Fitzgerald said: “One of the greatest privileges of my life has been to manage the Clare Senior Hurling team and I am immensely proud of the success achieved during my time at the helm.

“After this year’s All-Ireland Quarter Final defeat to Galway, I was undecided about my future and I indicated as much to the players in the dressing room post-match. In the weeks that followed, I asked the Joint Captains to ascertain the opinions of the wider panel on whether they would like a change of voice. In light of the ensuing meeting and the divided opinions expressed by players, I have decided that it would be in the best interests of Clare hurling that I step down from the role of manager.

“I will cherish the memory of seeing so many happy Clare faces when in 2013 we won what was only the County’s fourth All-Ireland title and again in Thurles last May when we were crowned National League Champions for the first time in 38 years. The Clare players were heroes on both days and it is my belief they will lift Liam McCarthy again in the near future.

“I was not asked to step down. The decision is entirely my own. In taking this decision however, I wish to reaffirm my absolute love and passion for Clare hurling.

“I want to express my sincere thanks to the respective backroom teams which have served alongside me for the past five seasons. It was a real pleasure to work with people of the highest calibre. I want to thank the Clare County Board for their tremendous support, Pat O’Donnell for his constant and generous sponsorship and support, and the players for being a key part of my life over the past five years.

“I want to thank the supporters and acknowledge the many people who travelled great distances to support their county.

“I leave the Clare job with a heavy heart but full of confidence that there will be further great hurling days for The Banner County.”