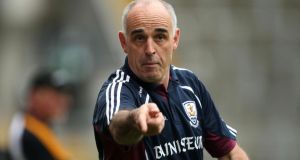 Anthony Cunningham says he had no problem having to reapply to stay in charge of the Galway hurlers and is delighted to remain as manager as the Tribesmen bid to end their All-Ireland famine.

Cunningham’s three-year term ended when they were knocked out of the All-Ireland qualifiers by Tipperary and he had to apply and be nominated when the position was thrown open by Galway.

Cunningham faced a stiff challenge from his former coach Mattie Kenny and also U-21 manager Johnny Kelly and former All-Ireland winning team-mate Brendan Lynskey before he was given the job for another two years.

“There is a lot of work to be done to have a crack at the Kilkennys and the others again next year and we are just looking forward to getting started again. We introduced a lot of players this year and it will be a big second season for some of them next year.”

He has bolstered his backroom team with former team-mate Pat Malone coming on board as a selector to join Damien Curley and Eugene Cloonan.

Malone was on the Galway minor and U-21 teams which Cunningham captained to All-Ireland titles in the 1980s as well as being with him when they captured the 1987 and 1988 Liam McCarthy Cup titles.

“I have known Pat a long time and he is a hugely respected figure in Galway who will bring a lot to the set-up. He knows so much about the game in Galway and it is great to have him on board,” said Cunningham.

“We will be looking closely at the closing stages of the club championships in Galway and see who is putting their hands up. There is always an opportunity there for a player and we saw this summer, when we had to play three big championship matches in a fortnight, that you need a big squad.”