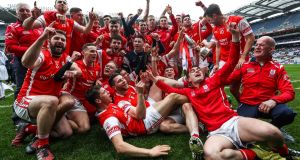 By the end, the end had been reached a while previously. Croke Park erupted into red-and-white, the indefatigable Cuala Ultras yelled out their acclaim and the Tommy Moore Cup was on its way to Dalkey. The anticipated quips were quipped and there won’t be an almond milked on Hyde Road for a week.

Dublin hurling passed another landmark in Croke Park as Cuala became the first club from the county to win the AIB All-Ireland championship. They were just too good on the day and yet another club hurling final has passed into double-digit history.

Cuala had started a little bit nervously but as they hit their stride they established dominance all around the field. Darragh O’Connell was a plausible man-of-the-match with a display of running, tackling and accurate shooting from centrefield but he was first among equals.

His second point was significant, just after Niall Deasy got through onto Pearse Lillis’s pass to sweep the ball past Cuala goalkeeper Seán Brennan and cut the margin to four, 1-10 to 1-14. O’Connell’s driving run from deep carried him all the way through the Ballyea defence for an emphatic response.

Most significantly the winners put the clamps on Tony Kelly, Ballyea’s danger man – a description that albeit damns him with faint praise. On the day he was well shepherded by John Sheanon, alternating with Jake Malone. Kelly didn’t manage to score but his two markers got 1-1 between them.

He was unlucky with a couple of shots, the first of which came off the woodwork, but Cuala’s success in restraining him was the death sentence for the Clare champions.

There was so much that the winners got right on a wet and windy afternoon in terms of match-ups and focused play. Their defence was vigilant and scrapped ferociously for ball before letting long balls go into the great acres of space at the other end where O’Callaghan and Mark Schutte were waiting.

As a unit the attack was fantastically aggressive in chasing down defenders whenever the ball was lost and time after time the energetic efforts forced hasty and ineffective clearances.

Ballyea manager Robbie Hogan lamented the easy frees given away and David Treacy converted the bulk of them but the winners’ attack was constantly more threatening. Con O’Callaghan, enfant terrible of Cuala’s progress didn’t add to his goal tally and was doggedly marked by Jack Browne but he threatened all afternoon and scored two points.

It was his flick from Sheanon’s dropping ball that sent Colm Cronin in for the goal that broke the game open in the 15th minute, a lead of 1-1 to 0-1 and in the 23rd minute he flicked a ball that came back off the bar.

Ballyea didn’t give up but they couldn’t make meaningful inroads. Perhaps if Lillis had finished a goal chance on the restart, a play set up by a glimpse of Kelly at his best intercepting a ball in his own defence and setting up the counter attack. But Oisín Gough got the faintest of touches and the shot was well saved by Brennan.

Had it gone in, the Clare team may have been inspired by the shrunken deficit but when they did break through with Deasy’s goal, Cuala responded so forcefully that it would be hard to be certain how the outcome might have been affected.

Ballyea in fact didn’t score again after their goal. Within a couple of minutes of O’Connell’s rallying point, Malone came on a surging run through the centre and finished with aplomb for an eight-point lead, 2-15 to 1-10.

There were six minutes to go but the celebrations began and further points from O’Connell, Mark Schutte and a brace from replacement Colum Sheanon stretched the lead into a final score that was a little unfair on Ballyea’s outgunned resistance.

It ended a great voyage for Dublin hurling. Afterwards John Sheanon recalled how he had been on the Combined Dublin Colleges team that had won the Croke Cup 11 years ago – beating by coincidence another Clare team, St Flannan’s – and how he hoped that this would give Dublin clubs the same confidence than their football counterparts perennially have.