Cork make no mistake against Waterford second time around 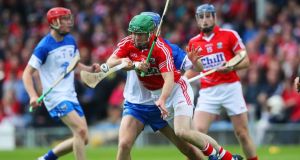 The pessimistic focus on Cork going into the Munster hurling quarter-final in Thurles was nearly as sharp as it had been on Waterford going into the drawn match a fortnight previously. In the end, it proved just as misplaced.

Conforming to the old rules of replays, Cork demonstrated that they had indeed greater room for improvement and also showed that favourites tend to make it count the second day. In so doing, they won their first championship replay in 11 years.

It was more of a championship day than the original match had been, with a notably bigger crowd – up 6,000 – and a far greater degree of urgency in the exchanges.

Waterford, having come face-to-face with what would have been a storied win in the drawn match, yesterday looked more anxious, as if unsettled by the added weight of expectation after their unexpectedly good showing last month.

Although their casualty list shortened with the return of Shane O’Sullivan from suspension and Shane Fives from injury, as well as Stephen Molumphy and Maurice Shanahan on the bench, fortune continued to scowl on Derek McGrath’s team when former All Star corner back Noel Connors had to be replaced after just over four minutes having aggravated a groin strain sustained in the warm-up.

That wasn’t all. Small differentials appeared in their performance levels. Pauric Mahony’s dead-ball shooting, blemish-free in the draw, was a little more wayward and although Waterford started well, the precision was not there in the use of possession and half chances went for nothing.

Shane O’Neill bailed out Damien Cahalane in the 13th minute after the full-back had found himself in trouble on Brian O’Sullivan and a goal chance flickered invitingly.

The defence was also constructive – wing-back Lorcán McLoughlin popping up everywhere offering support – triangulating out of trouble in the 17th minute in a move that ended with Bill Cooper pointing at the other end.

Underpinning Waterford’s unease was an inability to win an adequate share of ball from restarts and the consequent opportunities that created for Cork, whose forwards were a lot more accurate in their use of the ball.

In the drawn match Cork’s forwards had operated a need-to-score policy, only showing any urgency when the match looked to be drifting beyond their reach. The revival had been kick-started by Patrick Horgan’s move to the wing and his tally, including frees, had made up half of Cork’s total.

There needed to be a better spread of scoring threat if Jimmy Barry-Murphy’s team were to get the job done second time around.

As rumoured, Patrick Cronin switched to full-forward in order to try to relocate his best form and he gave a committed display on the edge of the square, creating difficulties under high ball and getting fouled for a penalty just before half-time, as well as having a shout at another such call earlier in the half.

The switch allowed Séamus Harnedy – unusually quiet the previous day – to start in the half-forwards and the overall impact was decisive. Conor Lehane was another to step up and together with Cooper, the only change to the team from the draw and who copper-fastened the good impression made on his introduction that day, they made a big contribution.

Ten points from play was the product in stark terms and six of those came in the first half, playing an important role in putting the match effectively out of reach by the break, short-circuiting the supplemented defence by taking on point chances as they arose.

Cronin drew an excellent save from Stephen O’Keeffe just before the break and was fouled going for the rebound. The now customary drama unfolded, with Anthony Nash advancing up the field to take his now familiar flick-and-chase penalty.

GAA administrators, having failed to regulate the situation at this year’s congress, must shield their eyes every time this happens but on this occasion O’Keeffe came haring off his line and blocked the shot.

Instead of a retake, play went on and ended in a point by Cooper but more dramatically, a scatter as players piled in on each other in the aftermath of the save.

Waterford were again competitive in the early minutes of the second half but, trailing by nine – 0-5 to 0-14 – they needed a more dramatic restart. The match simply ran farther and farther away – Alan Cadogan nearly getting a 43rd goal but for a tackle by Liam Lawlor – and the match fizzled out.

Cork dual player Aidan Walsh – who had another solid match at centrefield although outshone to an extent by his partner, the excellent Daniel Kearney – went on an inventive solo run in the 51st minute only to be rudely halted by Michael Walsh. He’s unlikely to fall victim to a clearer black-card foul but this being hurling, a yellow had to suffice.

The arrival of Séamus Prendergast gave Waterford a target up front but the rhythm of the match did not alter. A big cheer went up for the arrival of Paudie O’Sullivan, back for Cork after last year’s horror-injury and he obliged by scoring with his first touch of the ball.

Shane McGuigan 1-7 keeps Derry on the promotion trail 17:09
Tipperary have 20 points to spare as they claim first win of 2020 16:55
Kerry keep Royals at bay 16:52
Wolves make light work of dismal Norwich 16:34
Limerick’s scoring threat on full view as they close in on semi-finals 16:57
Crossword Get access to over 6,000 interactive crosswords