Cork get over the line against Galway 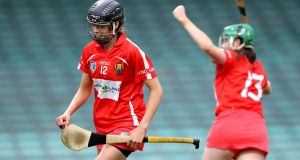 Cork withstood a frantic last-quarter rally from Galway to return to the Liberty Insurance All-Ireland senior camogie final for the fourth consecutive season.

Last year’s runners-up looked to be cruising when points from Katrina Mackey and Hannah Looney within two minutes of the resumption pushed them eight clear.

Astonishingly however, they went 28 minutes without a score and only managed one further point as Galway, driven forward by Aoife Donohue, edged back into proceedings.

Donohue slotted a free nine minutes from the end of regulation time and Galway were making all of the running but Cork defended magnificently, Rena Buckley, Chloe Sigerson and Ashling Thompson ensuring that the Tribeswomen would not find another goal.

Katrina Mackey finally ended the Rebels’ drought right on the hour and despite five minutes of injury time, they held out for a dramatic victory.

Galway’s management pulled a rabbit out of the hat when opting to move their leading scorer Ailish O’Reilly on Gemma O’Connor to prevent the St Finbarr’s talisman from exerting her normal influence.

Orla Cotter appeared to be the chief beneficiary as she got on a lot of ball, while displaying customary accuracy from placed balls.

Cork would have only had themselves to blame had they lost as they wasted four gilt-edged goal chances, including two early in the second half.

In the end though, they did breach the Galway defences twice and that proved the difference between the sides.

The first came as Aoife Murray sent a bullet from a penalty straight and high in the 11th minute, after Niamh McCarthy was dragged down by Rebecca Hennelly.

Cork were well on top for much of that opening period and struck a significant blow just before the change of ends when Cotter scored a splendid solo goal.

The rangy St Catherine’s player reached high above Róisín Black to fetch Murray’s long delivery on the 40m line and cut inside.

She got a sliver of luck when the sliotar rebounded to her after her attempted pass to Hannah Looney was mis-hit and poked to the net to make and though O’Reilly pointed straight after, it was 2-6 to 0-6 at half time.

Galway had the wind in the second half but Looney and Mackey stretched the gap to eight and seemed bound for a comfortable passage to the final.

That was to reckon without the courage of the Galway players but they had left themselves too much to do.