Down delight in Ulster derby success against Armagh

Eamonn Burns: ‘I’m just happy to get out the right side of the line’ 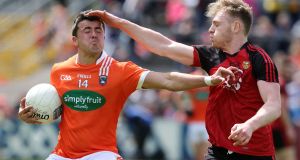 Stefan Campbell of Armagh holds off the challenge of Down’s Barry O’Hagan during the Ulster SFC quarter-final at Páirc Esler in Newry. Photograph: Matt Mackey/Inpho/Presseye

While Down manager Eamonn Burns admitted he didn’t enjoy Sunday’s match at Páirc Esler, he must have enjoyed the victory over near neighbours Armagh in the Ulster Championship in what was their first home provincial opener since 1999.

A measly home defence kept what is normally a potent Orchard forward line to just three points after the break to steer them to victory and set up a semi-final clash with either Cavan or Monaghan in the Athletic Grounds.

It was no more than the home side deserved in front of 16,168 supporters in in Newry as the Mournemen put in a high-intensity performance in both halves to come out on top.

“It’s not enjoyable. It’s pressure, it’s pressure, and I’m just happy to get out the right side of the line,” Burns admitted.

“We’re delighted. We took the opportunities that presented themselves and when we had to defend, we defended really, really well and really hard and really disciplined, and I’m delighted for the players.”

Down raced into a four-point lead after nine minutes with points from play by Caolan Mooney and Ryan Johnston before goalkeeper Michael Cunningham and Jerome Johnston converted frees.

However, Armagh, who had to do without manager McGeeney after his sideline ban, hit back with a Mark Shields goal on 13 minutes and while Aaron McKay pointed, further scores from Darragh O’Hanlon and Connaire Harrison put Down 0-6 to 1-1 in front 20 minutes in.

The visitors smashed in their second goal two minutes later when Andrew Murnin found space to rifle past Cunningham and then Aidan Forker and Paul Hughes tagged on points to put them 2-3 to 0-7 in front.

While Down rattled off scores from O’Hanlon, Harrison and Shay Millar, Armagh pointed through Stephen Sheridan and only for a fingertip save from Down’s debutant defender Anthony Doherty, they would have registered their third goal in stoppage time as they went in 2-4 to 0-9 in front at the break.

That was as good as it got for the men in orange though as Down dominated in the second period and wrapped up the Armagh frontline time and time again in a well-organised display.

O’Hanlon racked up the opening two scores of the half, which were added to by Mooney and Conor Maginn as Down led by two.

Rory Grugan eventually got Armagh’s first score of the half – even though it looked to have gone wide of the left-hand post on 50 minutes, but while Down sub Barry O’Hagan notched a score late on, Armagh kicked themselves out of the game with a succession of wides from scoreable positions.

Subs Gavin McParland and David McKibbin traded points in stoppage time – all 12 minutes of it following what looked like a serious injury to Down’s Niall Donnelly and a 20-man brawl close to the final whistle and while Jamie Clarke fired over a free, it was too little too late for Armagh as Down collected their first championship win since 2013.

“Even the first 10-15 minutes they ran up a four or five point lead before we really started, we were very slow coming out of the blocks. Then we weathered the storm and came into the game well,” said Armagh assistant manager John Toal.

1 Lionel Messi waves his magic wand again to guide Barça past Napoli
2 Rory McIlroy puts integrity ahead of glory in US PGA second round
3 Bayern Munich complete formalities with rout over Chelsea
4 Sporting Cathedrals: Semple Stadium, the very centre of the hurling universe
5 Sporting Cathedrals: Cheltenham reveals all about the wonder of racing
Real news has value SUBSCRIBE