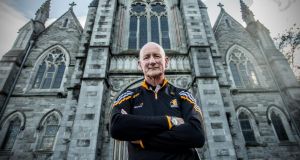 Brian Cody: “We learn from each other, and we learn from matches. We learn from all the various aspects of the game.” Photograph: James Crombie/Inpho

Don’t look back. It’s the same beginning, every year, because the last thing Brian Cody wants to talk about before an All-Ireland hurling final is the near or distant past.

“For certain,” says Cody, “because if I even knew what to do, from day one, and just kept doing it, I wouldn’t be here. We’re constantly learning, and there’s still so much more we need to learn.

“Am I just the same fella that is doing this job for the last number of years? Yeah, I’m the same fella, but I’d like to think I’m improving as I go along, and we certainly need to improve all the time.”

Now, that may or may not be a tell-tale sign that after 16 seasons as Kilkenny manager, Cody is nowhere near finished yet. Or that now, having retired from teaching, his future is only beginning.

What is certain is that ahead of Sunday’s showdown against Galway, the only thing that matters is being stuck in the moment. From those 16 seasons as manager, Sunday marks his 14th All-Ireland hurling final, 10 of which he has won.

Yet never once does he rely on what worked last year – or any previous year, for that matter. It is constant evolution.

“So whatever challenge is put in front of you, you’ve got to try to adapt to it. You’ve got to deliver and try to front up, every single day, and it’s about doing your utmost to cope with that challenge. We’re a team and I’m part of that team. I’m the manager but I’m just an absolute part of the team. It’s about constantly trying to look at how we can improve as individuals, and as a group, and I hope we have.”

So to the question of what fuels this constant evolution, and the last word Cody would use is hunger. “If you manufacture hunger, you’re not going to have hunger. I suppose it is called hunger, or call it what you like. But it’s the challenge, really.

“I think it comes natural for anybody involved in sport in a serious way. If there’s a challenge out there facing you, are you good enough to take on that challenge, and come out the other side of it?

“That’s what you’re trying to find out, but you’re part of a group of people who are doing that together and there’s a great sense of, ‘We’re in this together and we’ll drive this thing forward together’. We all contribute in our own ways and if there’s a weakness in any aspect of our preparation or of our team, we’ll be found out.”

There is also a difference between being willing to die to win and being willing to kill to win. Cody made the distinction at a lecture in UCD at the start of the year, although he still feels some people took it up the wrong way.

“And you can dress up that as cliche or what you will, and that’s all it is. Killing is something that may sound a bit barbaric, to some people, but in the context of sport you go out to try to dominate, to dominate your player, get your team to try to dominate.

“But that’s exactly what the other team are trying to do as well. I mean, that’s what everybody in serious sport does. So it’s just an expression, and I’d hate to think that anyone might think that we would ever try to do anything that would be in any way barbaric.”

Indeed, one of the consistencies during Cody’s 16-year reign is that killer instinct, even in the few championship games they’ve lost. It’s harder to explain why that’s always there, other than it being the only way Cody knows.

“It would be a shame to think that you would ever go out kind of softly or whatever it is. You’ll never win all the time, but you have to perform and be competitive. The mission is, the challenge is, to be absolutely competitive. And if you’re less than that, then you’ve got to look at reasons why you were and if you’re team doesn’t show a real spirit on the day, I think the manager has to look at himself and wonder why.”

All of which makes Sunday’s final so fascinating, not least because Galway manager Anthony Cunningham has instilled so much killer instinct into his own team, and confidence too, perfectly demonstrated when Cunningham informed Cody, moments after losing the Leinster final, that Galway would see them again in the All-Ireland final.

Cody, naturally, wasn’t even slightly surprised. “All Galway were was one match away from winning the All-Ireland semi-final, to where we were. They couldn’t be Leinster champions, but they could get to the stage we were, by winning one more game. So he was entitled to have that confidence.

“If he had a sort of deeper meaning, for what he said, fair play to him. It’s whatever was in his head.”

From here then, it may well be all in the head.