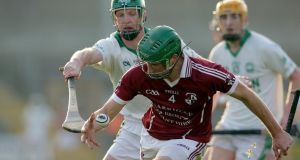 Ballyhale’s Henry Shefflin with Shane Prendergast of Clara as the teams battled for the Kilkenny title. Photograph: Inpho/Morgan Treacy

Ballyhale Shamrocks showed the calibre of champions as a composed first-half performance helped them march to a 15th Kilkenny senior hurling county crown.

The Shamrocks overcame a sticky start, one in which they leaked 1-2, to dethrone the 2013 kingpins Clara at a chilly Nowlan Park yesterday.

Instrumental in their success was captain TJ Reid, who celebrated his 27th birthday in style, notching up 10 points as the Shamrocks overpowered their rivals in confident style.

Getting their hands on the title seemed far from possible in the game’s opening stages, as Clara rattled off a burst of scores to leave Ballyhale heads spinning.

Chris Bolger got the reigning champions off the mark with a point before goalkeeper Killian Phelan converted a free from his own half.

It got even better when Bolger got on the end of a sweeping third minute move, gathering James Nolan’s pass and slotting the sliotar past Richie Reid (1-2 to 0-0).

Rather than panic, the Shamrocks hit back as only they know how.

By the 13th minute there was just a point in the game, Mark Aylward crashing home a powerful goal in the midst of a run that included points from Reid and James ‘Cha’ Fitzpatrick.

They began to get on top in defence as well, shutting out the Clara attack.

Although Clara pushed hard to get back into the game in the second half, Ballyhale – led by Reid and Cha Fitzpatrick – would not relinquish their grip. A six-point gap remained until well into the final quarter, despite the best efforts of Keith Hogan (three frees) and Conor O’Shea’s fine point from a sideline ball.

Stepping up the gears, Clara tried to force the game their way. Points in quick succession from Hogan (free) and Chris Bolger lifted their hopes, but three in succession from Reid, taking his tally into double figures, killed their momentum long before Lester Ryan’s close range free was stopped and cleared.