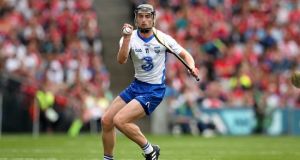 Pauric Mahony scored 10 goals as the 2017 All Stars beat their 2016 counterparts in Singapore. Photograph: Ryan Byrne/Inpho

Pauric Mahony bagged 10 goals as the 2017 All Stars comfortably beat the 2016 selection to win the PwC All Stars match in Singapore on Saturday.

The nine-aside, goals only, encounter was split into four quarters, with both sets of players regularly interchanging in the high humidity. The downtown inner-city venue made point scoring a little too risky for the surrounding traffic, but the lively crowd were treated to 53 goals in 40 minutes.

Played at the Padang sports field, set against the Singapore skyline, the 2016 side roared back from a five goal deficit to within a single score before Mahony’s five goal splurge at the start of the final quarter gave his team the daylight needed to seal the encounter.

Despite former Offaly hurler Gary Hanniffy - now the pride of the Singapore Gaelic Lions - scoring three of his four goals in the final quarter for the 2016 team, the 2017 side took over in the last of the four 10 minute periods to win by seven goals. They outscored their opponents by double scores in that decisive quarter; 12-6.

Galway’s Conor Cooney got the scoring underway with the first of his seven goals in the opening minute. The 2017 side went in at the end of the first quarter leading 8-4, with Conor Whelan’s quickfire hat-trick drawing gasps.

By half-time their lead was extended to 14-9, with Cooney again leading the line with three more goals. Tipperary’s Ronan Maher grabbed two goals to keep the 2016 selection ticking, including one effort from distance that nestled into the top right corner. The 2016 Hurler of the Year Austin Gleeson then got in on the act with his first goal, and in the third quarter Tipperary’s Patrick ‘Bonnar Maher scored two goals as the deficit was cut to the minimum.

However with a tight finale looking on the cards, Mahony quickly ended the match as a contest as he raised five green flags in a row. His Waterford teammates Noel Connors and Tadhg De Búrca also got their names on the scoresheet, up from the defence.

In the end though it was the firepower of Cooney, Whelan and Mahoney in the 2017 attack that proved the difference with 21 goals between them.