Waterford hopeful Gleeson will be fit for championship 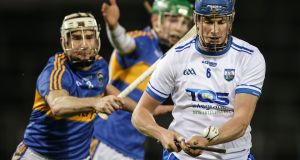 Austin Gleeson: the inspirational Waterford man is still battling back and ankle injuries as the championship looms. Photograph: Cathal Noonan/Inpho

Waterford are hopeful the 2016 hurler of the year Austin Gleeson will be fit for the opening of the Munster championship later this month.

The Mount Sion clubman, who also won the Young Hurler of the Year award in 2016, is troubled by back and ankle injuries but selector Eoin Murphy said they are hopeful he will be ready for the opening game against Clare on May 27th.

Gleeson will have an extra week to prepare as Waterford are not involved on the opening weekend when Cork host Clare and Limerick entertain Tipperary.

“We’ve been told he just needs to manage it. It mightn’t allow him to train for the next week maybe or so. We’ve been told that he should be okay. Everybody is important at this stage,” said Murphy.

He was speaking the launch of the Munster football and hurling championships in glorious sunshine at Bunratty Folk Park in Co Clare.

There will be 16 games in the two provincial championships, five in football and 11 in the hurling championship.

Tickets, which go on sale on Tuesday, have been kept at a uniform price for all grounds, with stand tickets priced at €20 for all games when purchased in advance and €15 for terrace tickets. Stand tickets for the Munster finals will be €35 and €25 for the terraces, the same as last year.

All counties will host two matches but Waterford will not actually have home advantage as Walsh Park is deemed unsuitable. Selector Murphy says this will prove an additional challenge for the All-Ireland finalists’ hopes of being of the three teams to emerge from Munster this summer.

“It’s a tough one. We would have liked it to be played in Waterford but it is what it is. The thing is that Walsh Park is going to be developed and future generations will hopefully get to witness Munster championship games there. For us, travelling away is a challenge. Even logistically, going up so far.

“Someone did up the stats there recently for this year and it was 70 per cent strike rate [for the home team in Division 1 of the league]. So, seven out of ten isn’t bad. We’re hoping that we can be in the three out of ten and sneak up there and get a win or two.

“Thurles is a bit like home, we play a lot of our games there. Even going to Cork previously probably wouldn’t have been as bad. Limerick and Ennis, our track record in Ennis probably isn’t great but 2018 is going to take on a life of its own, a bit like 2017 did for us.

“We are looking forward to the challenge, too. There is something nice about going into the cauldron that is Cusack Park with the home team and the crowd and the majority of people against you. You can get motivation out of that as well.”

There was good news for Tipperary over the weekend when Séamus Callanan saw his first action of 2018, scoring 0-8 for Drom-Inch after recovering from a back injury and manager Michael Ryan is delighted he’s back.

“The last couple of weeks have been good for Seamie. He has been on the pitch for his club and that’s where we wanted to see him. We are after having a good few rounds in Tipp. The last finished on Sunday evening there.

“We are waiting on an update on how fellas are. You pick up knocks every day you play but we will know more later on when we convene.

“I know Noel McGrath has had two games over the last period plus a football game. That has been very good for him.”

However defender Michael Cahill is a doubt for the opening match against Limerick on May 20th after picking up a hamstring injury playing for Thurles Sarsfields.

“We need a definitive prognosis of how he is. We are hoping he got off in time. It never looks good when you see a guy going off putting ice on a hamstring.

“That’s not a good sign, but look, we knew this was a risk. We just have to wait and see. Three weeks is still a fair bit of time for a soft tissue injury.”

Meanwhile, Cork football manager Ronan McCarthy has confirmed that Nemo Rangers’ Barry O’Driscoll has opted out of the squad, while the unrelated Brian O’Driscoll is struggling with a hamstring injury.

“He’s been in London, he’s gotten the best medical advice, but we’re just a bit uncertain. If he had a bit of luck – and he deserves it, because he’s put in a huge effort to get back after a serious shoulder injury – we’ll give him every chance to play some part in the championship,” said McCarthy.

The Rebels manager added that Brian Hurley came through a challenge match against Galway last week with no issues arising following a serious hamstring injury.