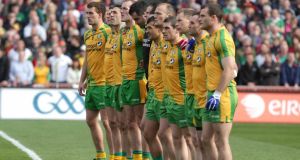 Both of the newcomers have however had a lot of exposure during the recent league campaign, which culminated ion the county narrowly losing the final to Dublin. Morgan was named Man of the Match for his performance that day and McAliskey scored three points from play.

Harte welcomes back Stephen O’Neill, who was named Player of the League but who missed the final due a bizarre ankle injury sustained during the warm-up, and Peter Harte, who also missed the final after picking up an injury in the league semi-final win over Kildare.

Apart from McAliskey, the attack is the same as started last year’s Ulster semi-final against Donegal, which the champions won by two.

Donegal have named the same team that started last September’s final for Sunday. It will be the first time all of the players have been available to manager Jim McGuinness since last September’s victory over Mayo.


Competitive
This means that Footballer of the Year Karl Lacey, who hasn’t played a competitive match this year is deemed fit to start.

Meanwhile, Kerry have made three changes from the team that lost last year’s All-Ireland quarter-final to Donegal for Sunday’s Munster championship quarter-final against Tipperary.

Fionn Fitzgerald makes his championship debut at corner back with Shane Enright on the bench and in the absence of the injured Eoin Brosnan Killian Young moves to centre back with Laune Rangers Peter Crowley coming in at left wing back.

Johnny Buckley is at centrefield with Anthony Maher, as former All Star Bryan Sheehan continues his return to fitness on the bench. Buckley has impressed for the county during the league.

Cork, who open the Munster championship against Limerick tomorrow have named five debutants in the team. Manager Conor Counihan starts for the first time the 2007 All-Ireland under-21 winning goalkeeper Ken O’Halloran and Tomás Clancy, who played throughout Cork’s League campaign.

This year’s under-21 captain Damien Cahalane and team-mates John O’Rourke and Brian Hurley who played in this month’s All-Ireland defeat by Galway are also brought in. Cahalane played last year for the county senior hurlers but decided to concentrate on football this season.

Patrick Kelly returns to the side following an injury which kept him out of this year’s league.