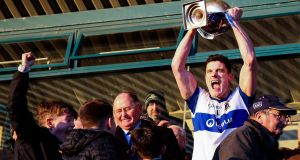 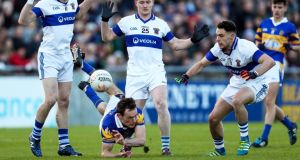 James Sherry of Castleknock is crowded out at Parnell Park. Photo: Tommy Dickson/Inpho

It wasn’t the widely-predicted blow-out but St Vincent’s won’t mind. The Marino club are Dublin champions for the 28th time, running out five-point winners over a Castleknock side that were in no way disgraced in their first ever county final. Brilliant second-half displays from Mossy Quinn and Diarmuid Connolly - both of them pretty quiet up to then - made all the difference.

The fear for Castleknock was that the stage lights would be too bright and that Vincent’s could be out and away by the time their eyes adjusted. But though they took a while to settle in the game, they kept their more vaunted opponents just about in range. They filtered players back and clogged up the middle and never let the serial Dublin champions flick the turbo switch.

As a result, once they got their legs under them, they hadn’t a huge distance to make up. Vincent’s led 0-4 to 0-1 after 17 minutes - not great for Castleknock but manageable all the same. Enda Varley was buzzing around to good effect, finishing well twice after patient build-up play by Mossy Quinn and Gavin Burke.

Quinn himself popped a clever score after direct running from Shane Carthy and Burke chipped another with a strong run off Diarmuid Connolly who had drawn two markers.

Connolly was peripheral for long stretches of the first half, prison-wardened expertly by Tom Quinn. And once Castleknock realised that the game was there for them, they started chipping scores at the other end.

Ciarán Kilkenny split the posts twice, once off either foot. Kevin Kindlon followed up with two of his own, both stabbed off the outside of the right boot. By half-time, they had drawn level at 0-7 to 0-7 and parity didn’t flatter them one bit.

Vincent’s came out for the second half meaning business. Mossy Quinn set up a point for Shane Carthy and kicked three more of his own. Connolly started to impose himself on the afternoon more and more, picking Quinn out for one of his scores with a peach of a 40-metre pass. All of a sudden, Vincent’s were 0-11 to 0-7 ahead with 40 minutes gone.

Castleknock didn’t go away though. They found a lifeline when Ger Brennan picked up two yellow cards inside 10 minutes, reducing Vincent’s to 14 men. Des Carlos popped a couple of frees to bring the margin back to two with 14 minutes to go.

But Connolly and Quinn were running the game now. Connolly reprised his earlier pass to Quinn, this time to Varley for the Mayoman’s third point. Quinn put Ruairi Trainor in for a handy one before Connolly pinged another glorious pass to sub Joe Feeney to push Vincent’s five ahead.