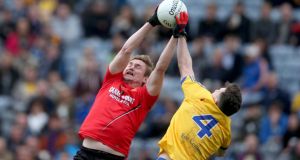 Caolan Mooney of Down claims the ball ahead of Roscommon’s Neil Collins during the Allianz Football League division two final at Croke Park. Photo: Donall Farmer/Inpho

It’s arguably the second biggest football match so far this year, and Roscommon have come out on top. And then celebrated it with all the instantly transitory euphoria demanded by the division two title of the Allianz Football League.

Because, no less than Down, this was essentially a lap of honour in Croke Park, after both counties secured the actual lasting prize: promotion to division one football for 2016. For Roscommon it’s their second straight piece of league silverware after claiming the division three title with a win over Cavan last year.

It was at all times suitably conservative, although not without some bite, either. Down lost centre back Brendan McArdle to a second yellow card just before half-time (the first of which eluded most of us in the press box), and so played out the rest of the game with 14 men.

Level at seven points each at half-time, Roscommon kicked on at the start of the second half, going four points up, thanks to two gems from man-of-the match Senan Kilbride.

Although not for very long: Down reduced the deficit back to a point, on 50 minutes, which simply drew another wonderful point from Kilbride. After that Roscommon showed a lot more class up front, a smashing goal from Ciarán Murtagh on 62 minutes easing them home, that ball broken down by substitute Donie Shine.

Indeed Roscommon, who started without young forward Diarmuid Murtagh, until half-time, opened with a little more appetite, going 0-3 to 0-1 in front thanks to Cathal Cregg, Ciaran Murtagh and a free from Cian Connolly. Down levelled it up after 10 minutes, thanks to Brendan McCardle, and then both teams went another 13 minutes before treating us to another score.

They then finished up the first half trading scores, Donal O’Hare hitting the best of them for Down, before Donal Smith levelled it up again for Roscommon, leaving it 0-7 apiece – and at least leaving it all to play for in the second half.

Anyway, no sooner had Niall Carty lifted the division two trophy for Roscommon, the thoughts were already shifted towards their respective championship dates. Roscommon are out again in just four weeks when they play London in Ruislip on May 24th in a Connacht football quarter-final. Down have six weeks before their visit to Celtic Park and their Ulster quarter-final against Derry, set for June 7th.