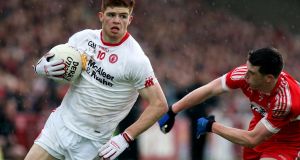 Flayed on their own grass. Mournful pre-game utterances from members of their only All-Ireland winning team, Tony Scullion and Joe Brolly, proved accurate; Derry exist on a football plain far, far away from Mickey Harte’s rebuilt and maturing Tyrone.

There were too many examples for the sodden locals not to tramp home in disgust.

Take Brendan Rogers on Sean Cavanagh. The fullback, tasked with nullifying the five time All Star’s influence, used his massive wingspan and a belting shoulder to goad Cavanagh into retaliation.

Nothing new for the 33 year old accountant (“The only survivor from 2003,” quipped Mickey Harte).

When the ball that really mattered landed between them, just on the square’s edge, Cavanagh used Rogers strength against him before spinning to fire off a strike of Pipo Inzaghi grace. Derry goalkeeper Thomas Mallon made a reactive save but the rebound fell to Ronan O’Neill who easily plundered his second goal.

With 19 minutes played that had the scoreboard reading 2-4 to 0-5. The game was over.

Most depressing of all for locals among this healthy 12,011 gathering was Derry’s clueless attacking ploys stalling in the face of a fluid, ravenous defence.

Tyrone devoured them before regularly tearing 70 metres up field with wonderful counter attacking football. See Niall Toner seeing no option but to dip the shoulder despite the presence of five white jerseys. It was like a man diving into shark infested waters and expecting to re-emerge with his limbs intact. The ruffled corner forward waved both arms at David Coldrick after he was expertly dispossessed. The Meath referee would have been forgiven for laughing in his face.

But this was far from funny. And, unfortunately, far from competitive.

The free count at half-time told its own tale: Tyrone had expertly earned 13 Derry’s six. James Kielt brilliantly landed two of these long range efforts and a cracking point by Mark Lynch had the contest nicely poised at 0-5 to Tyrone’s 1-3.

But those three first half goals snatched away any hope. 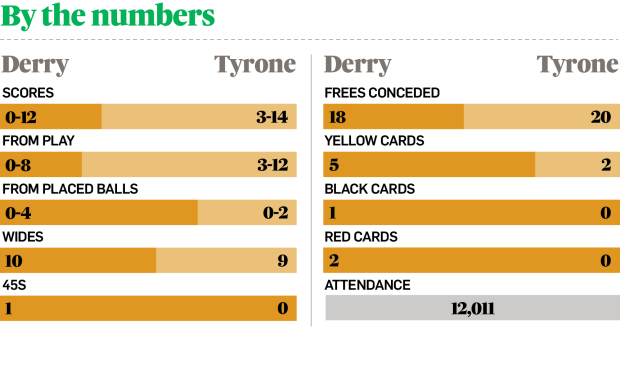 “That was classic defence turnover stuff,” said a temporary sated Mickey Harte now Tyrone have ended a six season losing streak in Ulster. “Hold the opposition up, force them into error and seize the opportunity to go at them.”

Derry were overrun by Tyrone’s superior coached players, who play with impressive clarity. It’s what makes them contenders in 2016.

“It’s not even about the difficulty implementing it,” Harte explained further. “It’s about having the people to do it. We have the age profile and the people with the ball skills to do it now.”

“We have the players who have the legs, who can move the ball at pace, and that’s what you need to have this transition game. You can’t transition back to front at five mile an hour. It’s got to be something much higher than that.”

As the rain bucketed down Tyrone went for the jugular, rattling off an unanswered 1-5 in 14 minutes.

O’Neill’s second goal came off the wily Cavanagh. Duffy was caught out again and pulled soon after. Not that the corner back should shoulder all the blame. This was a collective collapse.

Cavanagh also had a hand in Harte’s nicely drop kicked finish, for the third goal in first half injury time, as Derry were caught for numbers after yet another length of the field attack.

“The team that gets on top always looks fitter, looks more energetic,”

was the observation of veteran Derry defender Gerard O’Kane. “They look more hungry, psychologically I think that was the difference. At this standard of Gaelic football most teams have the same fitness.”

But these teams were not of the same standard, not at all.

Derry manager Damian Barton reacted by deploying two big men, Caolan O’Boyle and Eoghan Brown, at full forward for the second half. It took Tyrone one hanging ball to readjust, funnel men back and easily negate the threat.

The goals already made the second half irrelevant. Points received golf claps as Tyrone invited their hosts onto them. The football on view plummeted way below the hectic opening salvo with any chance of a revival ruined by Ciaran McFaul’s red card on 54 minutes. The humiliation was complete when captain Christy McKaigue also walked after seemingly elbowing Colm Cavanagh.

“We will be appealing,” said Barton. “I need to look at it but Christy said he just walked into him.”

It is hard to know whether Tyrone are All-Ireland contenders because Derry are so far off the required pace for Ulster championship.

At least Harte guides them into an Ulster semi-final, to play Cavan or Armagh, as Derry face a similar backlog of club fixtures that saw six of their starters injured ahead of the 2015 qualifiers.

“It’s two weeks before you are right and that’s no exaggeration,” said O’Kane. “But we have a game Wednesday and Sunday.”

Three games in seven days; the Derry county board have lost all sense of logic, certainly if they ever want to climb out from underneath the current veil of mediocrity.

Dark days for a once proud football county.

1 Dave Hannigan: Notre Dame’s Fighting Irish leprechaun needs its ass kicked
2 Trick or treat: Ireland set for Halloween showdown with France in Paris
3 Leeds go back to the summit after impressive win over Stoke
4 Dean Rock admits ‘less in more’ as he approaches Keaveney’s scoring record
5 Katie Taylor out to banish all doubts in rematch with Delfine Persoon
Real news has value SUBSCRIBE

F1 warns Leclerc over breaking Covid-19 protocols 20:24
Gavin Moynihan makes strong start with bogey-free 69 at Austrian Open 20:13
Dean Rock admits ‘less in more’ as he approaches Keaveney’s scoring record 19:46
Leeds go back to the summit after impressive win over Stoke 19:32
Holder shines with the ball as West Indies take control against England 19:23
Crossword Get access to over 6,000 interactive crosswords