Purposeful Kerry ease by Monaghan to verge of league semi-final 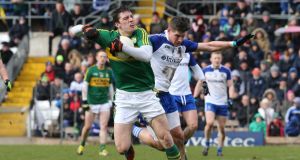 David Moran’s Kerry turned things up a notch in the second half against Monaghan. Photograph: Inpho

There is an attitude about Kerry football right now that is slightly unrecognisable. At least for this time of year, when league points have often been let easy come or easy go.

Not here, with so much about Kerry’s performance, particularly in the second half, feeling like a statement of intent: Eamonn Fitzmaurice has never made the league semi-finals in his four years as manager, and nothing is going to stop them now.

They went about it in style too, the victory more comfortable than the scoreboard suggests. Even Monaghan were left wondering how they managed to stay level up until half time, six points apiece, because they were wiped out in the second half, now left to fight what looks like a losing battle against relegation in the final round.

No such worries for Kerry, who if anything appear to have league ambitions beyond just a semi-final. “Yeah, four wins in a row is great, to keep that run going,” said Fitzmaurice. “We haven’t won four successive league games in a while, particularly when three of those were on the road. That’s testament to the lads, they’ve worked ferociously hard, pulled out some big results.

“Conditions were tough for us in the first half, playing into the breeze. But we were still smarting a bit from the defeat to Monaghan, last year. We got on top of their kick out, in the second half, and that gave us a good platform.”

Not that Fitzmaurice is willing to talk about outright league victory just yet: “Well I think every year I’ve been here we started out to do make the semi-finals. My first year we didn’t expect to lose four in a row, and be scrapping against relegation.

“We were close last year. One more point and we would have made it, in Omagh, whereas one point less we would have been relegated, but yeah, thankfully we are there now.”

It was the complete team effort with several individual sweeteners. The attitude of Colm “Gooch” Cooper couldn’t be any better, and any fear he might never recover his former mojo can now be dismissed. He won and played buckets of clean ball, scored 0-5, and should definitely have been awarded a first-half penalty which referee David Coldrick somehow ignored completely.

Indeed Coldrick had one of those days, puzzlingly slow to punish anything. Kieran Donaghy was everywhere, although not always where he was supposed to be - yet was never carded. Just after the hour mark, not long after Darren Hughes poached a goal back for the home side, Paul Murphy was dragged down by Monaghan goalkeeper Rory Beggan, for what should have been a textbook black card. Coldrick simply wasn’t bothered - that penalty then brilliantly converted by David Moran.

He did show Dessie Mone a second yellow card three minutes from time, although that counted for nothing. Kerry were home and dry 12 minutes into the second half, when they kicked six unanswered points in succession, including a slice of cake from Donaghy, who finished with 0-2.

By then Kerry were crushing Monaghan in the kick-out, thanks in part Johnny Buckley, but also Donaghy, and there’s no doubt last year’s All-Ireland losing captain is making a sort of statement of intent too.

“Kieran has worked very hard during the winter, the off season,” confirmed Fitzmaurice, “and was determined that if he was to come back for another year, that he’d have another go at it, that he’d be in the shape of his life. And I think because the shape he’s in he’s playing great football, and a great leader.”

Darran O’Sullivan still looks as hungry as ever, Alan Fitzgerald came off the bench to land four points, and so too did Paul Geaney, in what was his first appearance since last year’s All-Ireland defeat.

For Malachy O’Rourke, the Monaghan manager, the end result was much less disappointing that the performance. He spent several minutes assessing their game without once mentioning the word “relegation”, which even if they beat Donegal in Castleblaney next Sunday might well be their fate for 2016.

“No, I’m not deliberately not mentioning it,” he then said. “From the start of the year we wanted to take very game on its own merits, like we did last year, and if we did that, things will take care of themselves. I’m not sure if that will be the case, after next weekend.

“But of course we know relegation is a distinct possibility, unless we improve our performance, big time. We want to stay in this division, and that’s what we’ll be trying to do.”

They can definitely improve, and in fact matched Kerry for much of that first half, in only thanks to the old boot of Conor McManus: once he was taken out of the game in the second half that threat dried up completely, as they went 18 minutes of the second half before Beggan stepped up to convent a long-range free.

“I felt we started the second half very flat, Kerry got the few points, and we were left chasing the game after that, never got to grips with it,” added O’Rourke. “It’s a sickener, for us, because while our first half was better, but we let it down again in the second half. For whatever reason we never got, whereas Kerry played very well, kept recycling the ball until they got the right man on the ball. They pushed up more, put us under a lot more pressure.”

That pressure now spilling all over Monaghan’s final game against Donegal, while Kerry can look to make another statement on intent against Cork.